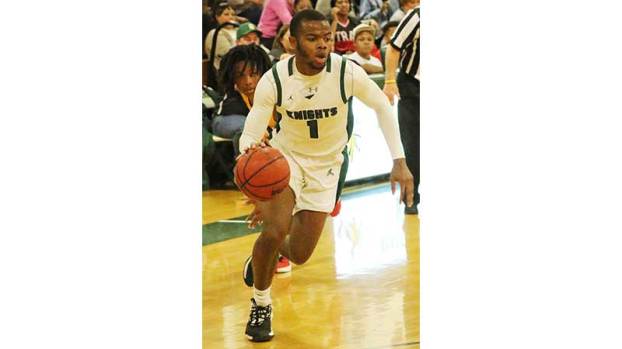 Knights junior forward Gerry “Tae” Toney was named the 2019-20 All-James River District Co-Player of the Year for boys basketball. He was joined on the all-district first team by Knights junior guard Amari Toney.

Gerry Toney also made the All-Region 2B first team, and Amari Toney made the second team, after helping the No. 2-seeded Knights (22-4) advance as far as the regional semifinals.

Boyers said he thought his team was well represented among both the district and regional awards.

“We had a heck of a season, and the teams and coaches really respected our guys and thought a lot of them during the meeting,” he said when asked about his team’s all-district representation.

He said winning the Player of the Year honor meant a lot.

“I work for it, and I try to get to that spot every time,” he said.

Boyers said he was excited for Toney receiving the top district honor.

“I think it was well deserved,” he said. “He’s done a heck of a job for us all season, just offensively, defensively, being a leader, his scoring, his rebounding — he’s done it all for us this year. He led us in points, rebound, assists and was second in steals and blocks.”

This was Boyers’ third season as head coach of the team and first time winning the district Coach of the Year honor.

He led the Knights to the district tournament championship and a share of the regular season district title.

A key contributor to that effort was Amari Toney, who averaged 13.2 points, four rebounds and two assists per game. He led the team in 3-point field goal and free throw shooting percentage.