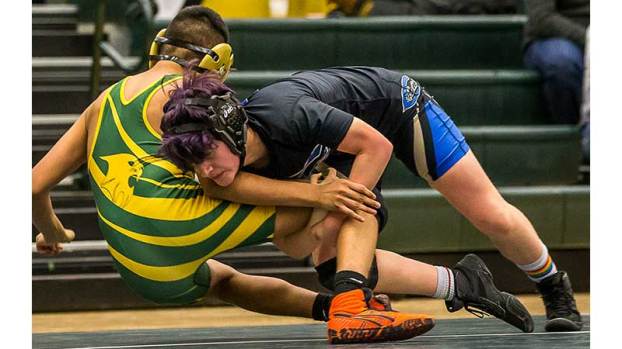 Cumberland County Middle School eighth-grader Maddie Dayton drops her opponent to the mat during a tournament in Louisa County amid the 2019-20 season. (Photo by Andy Crenshaw / Knowledge Kreations Designs)

Maddie Dayton has found a new sport she really likes and has continued honing her abilities in it even after its 2019-20 season has concluded.

The Cumberland County Middle School eighth grader placed second Sunday, March 8, in the middle school 104- to 108-pound weight class of the War of the Roses all-girls wrestling tournament in Orange.

She went 1-1 in the event, losing by a 7-0 decision to the weight class champion and winning her other match by a 9-0 decision.

She is still inside her first year of formal wrestling experience. She said she started a little before the 2019-20 season by going to the Blackhawk Gym in Powhatan for a couple of weeks.

“I had wrestled with my older brother for a little bit, but definitely Blackhawk was my first practice environment I’ve ever been to,” she said.

Then most of her formal experience came during the high school season.

Her father, Joey Dayton, noted that she was with the middle schoolers.

“They don’t get a whole lot of matches at middle school,” he said. “It’s more just practice and exposure, and then the nice thing about wrestling is, you have the high school-sanctioned events, which are the (Virginia High School League) VHSL events, but then you also have all kinds of wrestling tournaments that are sanctioned by USA Wrestling.”

Maddie has gained enough exposure to the sport to have formed a strong impression about it.

“I really like it,” she said. “I’m excited to get better because I have my entire high school (career) to get better. I’m going to be wrestling at Blackhawk in the offseason, and I think it’s great.”

Asked what specific aspects of the sport she really enjoys, she said she did not really know but suggested the appeal had to do with learning and getting better at it.

“It’s just exciting,” she said. “Yeah, it is like a sort of one-on-one thing, and that’s really intimidating, but also really interesting and rewarding.”

In addition to the coaching she received throughout the season from Cumberland County High School Head Coach Charles Bristol, Maddie has had an ideal tutor at home in the form of her older brother — senior 152-pounder Trevor Dayton.

Trevor Dayton won the James River District and Region 1B championships in his weight class this year before placing third in the VHSL Class 2 State Tournament.

“Yeah, we wrestle almost every night, just on our trampoline or in the kitchen,” Maddie said. “And he comes and he stands in my corner while I’m wrestling (at tournaments) and tells me what to do.”

Trevor Dayton said his sister is very smart and is learning very fast.

“I think that as she starts to compete more and get more comfortable competing, she’ll be able to actually show all the skills that she has and has learned, and I’m excited to see how she does,” he said. “I work with her a lot and try and teach her as much as I can.”

Maddie is one of several girls participating in the Cumberland County Public Schools wrestling program, and her father noted that girls wrestling is growing.

“However there’s no recognized VHSL girls league for wrestling,” he said.

She has competed in three tournaments so far, and he said one of them came during the 2019-20 season, but it was not a VHSL-sanctioned event.

Nevertheless, Maddie will be preparing herself for opportunities that await her on the mat.

Longwood sports teams pause for at least a week