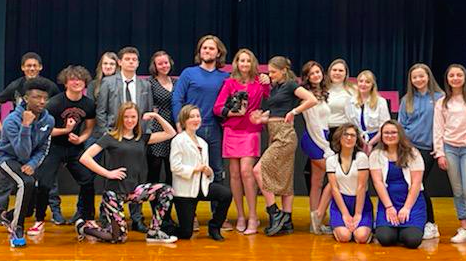 Performances will be held April 3 at 7 p.m. and April 4 at 3 p.m. and 7 p.m. in the high school auditorium. Tickets are $8 for adults and $6 for students and children. Tickets will be sold at the door before each performance.

“Legally Blonde Jr.,” follows the transformation of Elle Woods as she tackles stereotypes, snobbery, and scandal in pursuit of her dreams. When Elle’s college boyfriend, Warner, dumps her for someone more serious and heads to Harvard, Elle takes matters into her own hands, charming her way into law school. Befriending classmate, Emmett, and spunky hairdresser, Paulette, along the way, Elle finds books and looks aren’t mutually exclusive. As Elle begins outsmarting her peers, she realizes law may be her natural calling after all.

“Legally Blonde Jr.” features a large and energetic cast of more than 20 students and is a fun romp for people of all ages. The designation Jr. at the end of the title indicates that although the movie was rated PG-13 this version of the play is “G” rated and is appropriate for all ages.