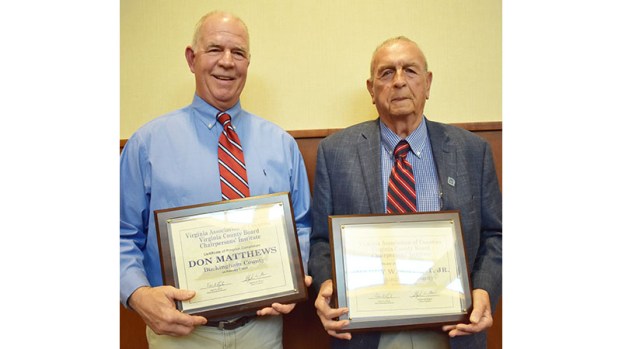 From left, Buckingham County Board of Supervisors Vice Chairman Don Matthews and Chairman Harry Bryant proudly present their plaques for completion of the Virginia Association of Counties’ Chairpersons’ Institute. (Photo by Alexa Massey.)

Buckingham County Board of Supervisors Chairman Harry Brant and Vice Chairman Don Matthews were all smiles at Monday night’s board meeting as they presented plaques and announced their completion of the Virginia Association of Counties’ (VACo) Chairpersons’ Institute.

According to VACo, the institute is presented by current and past county leaders and administrators and is carefully tailored to meet the training needs of community leaders in critical areas such as government structure, powers and responsibilities, media and internal work relations, managing meetings, citizen engagement and county government.

Matthews and Bryant spent a weekend in the state’s capital to undergo the training offered by VACo. Matthews said the institute covered important topics like Robert’s Rules of Order, public hearings and how to control a board meeting from a chairman’s position should the vice chairman need to step in.

Bryant felt similarly about his experience at the institute.

“I learned a lot. I think that it was conducted really well, and I was really glad to be a part of it.”