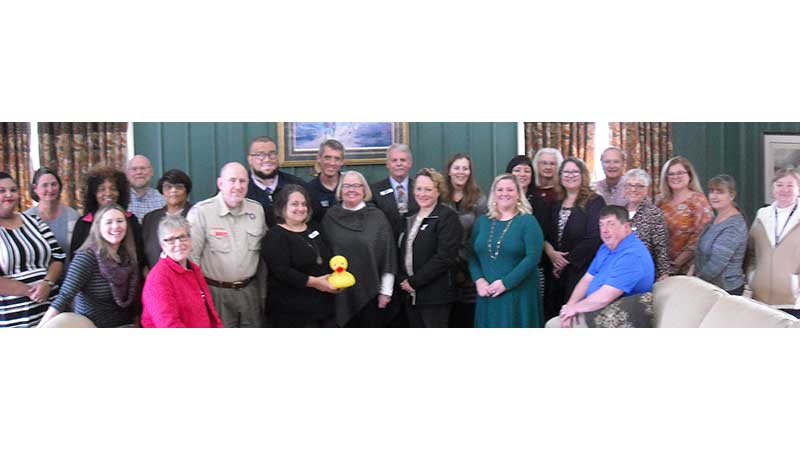 The United Way of Prince Edward County distributed almost $30,000 to its 23 partners during a recent luncheon.

This is the 10th year that all-volunteer members of the United Way’s board of directors met with representatives of its partner organizations for “lunch, conversation, discussion – and to pass out checks,” noted Rucker Snead, president of the United Way.

“Our mission hasn’t changed – it’s to raise money and put it back out,” he said.

In recent years, the United Way gives approximately 95 percent of the funds it raises to its partners and has traditionally given at least 90 percent, board members noted.

The goal is to raise $65,000 this fiscal year. Approximately $31,000 has been raised, and that is, unfortunately, about a third less than what it raised last year this time, Snead said.

“I don’t know what’s going on,” he told representatives of the partners during the Wednesday, Jan. 29, luncheon at the Train Station. “What I hope is the money that isn’t coming to us is going straight to you all.”

Consequently, the board is making a push to promote its signature fundraiser in hopes of making up the difference and ending the year with a flurry. The Third Annual Great Farmville Duck Derby will be held Friday, May 1, at Riverside Park in conjunction with the Heart of Virginia Festival.

All proceeds go to the United Way’s partner organizations. Last year’s event raised $6,030 and helped put the group over its fundraising goal for the year.

“I was excited to see people getting excited about seeing these ducks come down the river,” Bruce Davis, the board member who is overseeing the race and its promotion, said.

The derby’s official kickoff will be a wine and brew on Friday, Feb. 28, at the Longwood Center for the Visual Arts.

The United Way is looking for companies, organizations and individuals to sponsor the derby.

“What a great night — to see all the support from the HSC fans was wonderful,” Davis said. “The part I liked … was when I saw students buying the ducks. What a great feeling it was to see them getting involved.”

Fellow board member Christine Prengaman agreed, “I can’t wipe the smile off my face. What a great event.”

In March and April, as part of efforts to promote the event and raise funds, a paddling of man-made ducks — in groups of four or six — will be placed in people’s yards as a fundraiser and promotion. People will have to pay to have the ducks removed to someone else’s yard of their choosing. The paddling of four ducks will be removed for $20, and the six ducks will be moved for $40.

“At night in our duck gear, we’ll show up and move the ducks,” Davis said. Then, he added with a chuckle, “We’ll probably have to let the police know what we’re doing.”