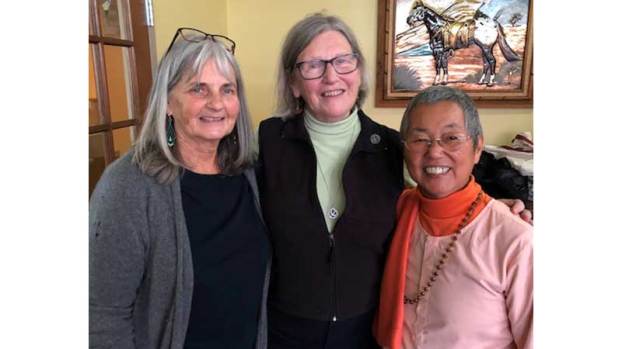 NETWORK, a group of advocates for justice founded by Catholic Sisters, released a new report Tuesday titled “Raising Rural Voices: Listening to the Hopes and Hardships of Rural Communities.”

NETWORK hosted the release at a gathering at the National Press Club in Washington, D.C., Feb. 25.

The report’s findings are based on rural roundtables held nationally last year. One such roundtable was held in Buckingham County last November.

The document, according to a release from NETWORK, details the concerns of 17 rural communities across the country, with subject matter ranging from immigration to health care transportation. The findings of the report showcase how rural problems need rural solutions.

NETWORK reached out to the local Friends of Buckingham group in order to arrange a Virginia Rural Roundtable in Dillwyn back in November. The roundtable gave community members a chance to voice the rural concerns of Buckingham County on a national level, including discussion of the highly-controversial Atlantic Coast Pipeline and a proposed compressor station to be built in the county’s predominantly black Union Hill community.

Friends of Buckingham President Chad Oba told The Herald the group was honored to be included in the rural roundtable.

“We spoke of a diversity of needs from access to broadband, the need of more mental health resources for at risk students in our local schools, to the siting of polluting infrastructures in rural areas, to the need for additional emergency response in our rural county.”

Sister Simone Campbell, SSS, executive director of NETWORK, said roundtable participants, from California to New York, all carried with them the feeling that their rural perspectives on justice do not matter.

“That’s why we’re releasing this report and bringing this conversation to Washington,” she said in the release. “To raise rural voices and continue our work to create a society that promotes justice and the dignity of all people.”

The full report can be found at https://tinyurl.com/raisingruralvoices.

Area to benefit from $28M in broadband funds

Buckingham benefits first   Buckingham County residents will be the first to benefit from $28 million in funding to expand... read more