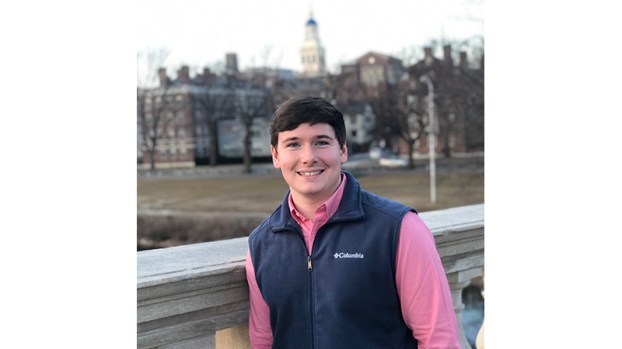 Daniel Brickhill, of Buckingham, is part of the class of 2022 at Harvard University where he is majoring in government. Known for being active in his community as a high-school student, he has aspirations to run for public office in the future, hoping to serve central Virginia and eventually the nation.

PROGRESS: Making the most of his time

Daniel Brickhill and the word “outstanding” are probably closely linked for all who know him and many who simply know of him.

Many Buckingham County High School students have shared a political opinion or two in conversation or perhaps in brief on social media, but few have taken the time to articulate their beliefs by writing multiple guest columns on the opinion page of their local newspaper. Brickhill took that time.

Many high-school students may express a desire to give back to their community, but fewer probably follow through to the degree that it helps shape the direction of their lives. Brickhill has been indelibly impacted by his public service in a way that has helped prepare him for life after high school and left him eager to get back to work for others’ benefit.

Some high school students may develop a desire to serve in public office, but few — if any — create an early campaign for the 2036 U.S. presidency. Brickhill did, and one can learn more about it at brickhill2036.org.

Many high-school students are successful in the classroom, but relatively few perform well enough to get into Harvard University. Brickhill is in his sophomore year at the prestigious Massachusetts Ivy League school.

He noted he has had a positive experience thus far at Harvard.

“I don’t have any complaints,” he said. “It’s probably been what you would expect with distance, trying to figure that out and figure out what it’s like to live in a big ol’ city a long way from home. But I’ve gotten lucky and blessed in some of the people that I’ve been able to connect with.”

He is majoring in government.

He affirmed that the principles he learned at school in Buckingham have served him well at the college level.

“There’s something to be said about coming to a new environment but being comfortable in taking on responsibilities,” he said. “And I purposely use that generally, just having been given responsibility in high school that maybe you weren’t sure what to do with at first but you just kind of had to learn on the go. And you had good people there with you to help you learn as you went, and I think it’s freeing to be able to come to the college level and not be intimidated by some things that I think a lot of people in their late teens and early 20s would go, ‘Well, I don’t have the skill set to do that.’”

Brickhill said one benefit of the single high school county is there are a lot of organizations at the high school that give many students a chance to give back to the community.

“I can’t tell you just how much I’m grateful for especially the Buckingham SCA, the Student Council Association and the student government in general there, how the advisers were able to facilitate such great opportunities for all of us to not only learn and get a lot of skills but to give back to our community just through lots of various ways, whether it’s how we related to younger students in the school system (or) how we tried to give back to the school system directly,” he said.

He volunteered at Central Virginia Christian School and engaged in tutoring and elementary outreach, including educational outreach at The Governor’s School of Southside Virginia, youth camps and community events, like the SCA-hosted Trunk or Treat.

His early campaign for the U.S. presidency began during the 2016 election cycle and was born, in part, out of his perspective that as many people as possible from rural, underserved communities should be getting involved in politics and public service.

He noted these people have fewer resources at their disposal to lead in the U.S. compared to those from an urban or suburban background, but he realized in high school he had at least one resource — time.

“I can use that time to begin to articulate my beliefs and make connections and meet people and learn from people and … if that’s my relative advantage to other people, then I’ve got to take advantage of it, and I’ve got to start now and see what time will do for me,” he said.

When he has free time amid these important pursuits, he enjoys intramural sports at Harvard, including basketball, pingpong and squash. He also enjoys going for runs along the Charles River to Fenway Park, though he said he prefers Gene Dixon Sr. Memorial Park in Dillwyn.

He noted that he makes sure to return home a few times during the school year to be with his family and hopes God will lead him back to central Virginia to serve the public there in a few years.

Barbara Daniels was born in a little town in Southern Indiana called “Bennettsville” in 1944. She attended college in Williamsburg,... read more