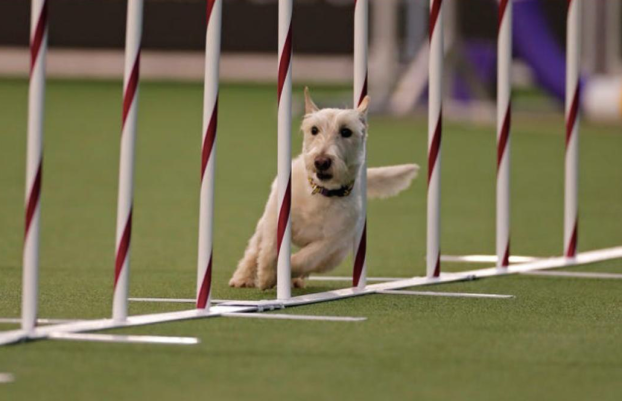 Pickles, a Scottish Terrier from Cumberland, weaves in and out of the weave poles at the 2020 Westminster Kennel Club Dog Show agility competition.

Those who watched the 144th Annual Westminster Kennel Club Dog Show last week may have seen a familiar, furry face on television in the form of Pickles, a female Wheaten Scottish Terrier from Cumberland County.

Although Pickles did not place in the competition, the event was an exciting opportunity for both dog and owner. Pickles was the first Scottish Terrier to ever make it to the finals.

Speas welcomed Pickles into her life in 2014. When Speas’ mother grew ill, Pickles and Speas made visits at the rehabilitation center at The Woodland, Inc. in Farmville. The pup helped Speas through her mother’s passing and the loss of several pets.

Speas noted she and Pickles almost flunked out of puppy agility class because they weren’t attending due to so much going on in their lives. The Scottie also saw a setback in her agility training after having to undergo double patella surgery.

However, Pickles did not let her injuries bring a halt to her training. She continued to take agility classes and developed a love for the sport. Speas found that her tiny Scottie was full of speed and dexterity.

Pickles has also developed an extensive career as a therapy dog. Pickles began taking therapy dog courses, and Speas is a therapy dog tester/evaluator and a canine good citizenship evaluator. The duo often go to Heritage Hall Nursing Home in Dillwyn and also visit St. Francis Hospital in Midlothian once a month.

Pickles went to the American Kennel Club (AKC) invitationals in Florida in December and was ranked number one for 2019 in Bad Dog Agility.

After qualifying for Westminster, Pickles and Speas ventured to New York. Pickles competed with the eyes of the nation upon her. Pickles had two clean runs at the start of the competition, but Speas was concerned that the presence of taller dogs like Australian Shepherds and Border Collies would inhibit Pickles from getting further in the competition.

“Just because you have two clean runs doesn’t mean you make it to finals. It’s also based on speed. And she had the speed, which prompted her into the finals,” Speas said.

However, Westminster was very much a success in Speas’ eyes. Pickles making it into the final round of the competition was a victory in itself, and the Scottie will go on to compete at the AKC nationals in March, to be held in Georgia.

When the tiny dog isn’t bounding across an agility course or volunteering as a therapy dog, Pickles enjoys such hobbies as canoeing down The James River and riding a Harley Davidson.

“She has a good life,” Speas said.

The varsity boys basketball 2019-20 James River District regular season co-champions faced off against each other in the district tournament... read more