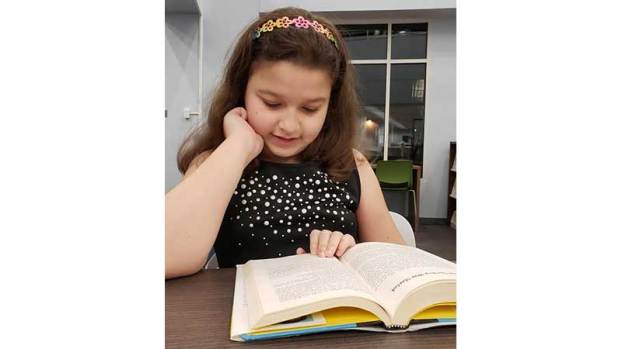 Elena Salamo of Fuqua School competed at this year’s Scripps Private School Regional Spelling Bee. The fourth grader enjoys reading and math and has developed a passion for spelling.

One word at a time

Although 10-year-old Elena Salamo didn’t start learning English until kindergarten, that didn’t stop her from winning her school’s spelling bee and going on to finish fourth in the regional competition in Richmond.

Salamo, now a fourth grader, moved to Farmville from northwest Arkansas in 2014 when her mother, Yulia Uryadova, was hired to teach history at Longwood. Salamo’s first language is Russian.

The beginning of 2020 marked Salamo’s first dive into the world of spelling bees.

After winning a preliminary spelling bee for her classroom, Salamo became eligible to compete in Fuqua School’s school-wide spelling bee. She won her school bee after 34 rounds and advanced to the Scripps Private School Regional Spelling Bee held at Richmond’s Waldorf School Feb. 3.

At the regional competition, Salamo originally felt nervous. The majority of the other competitors were older than her, and spelling bee champs from throughout the region were there to represent their schools.

Salamo, however, had many proud people sending her motivation from back home. Salamo was ecstatic to receive an email the morning of the competition from Lower and Middle School Head of Fuqua School Dara Tucker sending hugs and lots of luck. Her nervousness was replaced with excitement once the competition began.

Uryadova described the experience of watching Salamo on stage as incredible. Her daughter spelled many challenging words, such as “duress,” “haughty,” and “misdemeanor.”

Salamo was eventually knocked out of the competition after missing one “t” in the word “marionette.”

She left the regional competition with a fourth-place title, but was not disheartened. She told her mother that she had fallen in love with spelling. Her teachers and friends congratulated her upon returning home.

Salamo’s father travelled from Arkansas to Virginia twice in one week to watch her compete in the school and regional spelling bee. He, Uryadova and Salamo’s grandmother, were all extremely proud of the young girl who had worked so hard. The competition helped Salamo to develop a sense of self-confidence and an ability to remain calm and focused under pressure, one word at a time. Outside of the world of spelling bees, Salamo loves to play the piano, dance and play tennis. She’s a big fan of traveling in the U.S., and has been to 24 states. She looks forward to being able to travel abroad when she’s a little older. She’s described by her mother as being quiet but smart, diligent and having a kind heart.

Salamo has some advice for other kids looking to excel. “Study hard. Don’t be nervous, and believe in yourself. You can do it.”