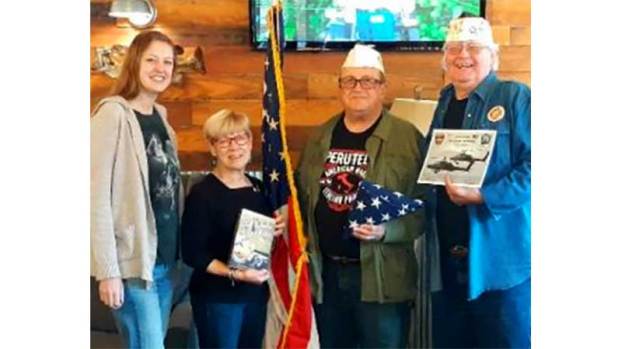 CW2 Michael “Buddy” Weaver was deployed to Afghanistan as an Apache pilot in 2007. To deal with the fears and uncertainties of a deployed son, his mother, Maggie McCreath, made a point of sending cookies to Michael and his mates. She baked and sent a different type cookie nearly every week of Michael’s deployment. McCreath wrote and published a book of her cookie recipes. Her story, “52 Weeks of Cookies” is much more than a recipe book. It is a story of family, hope and patriotism.

Upon hearing of this All-American family, the Auxiliary of Post 7059 added CW2 Weaver to their list of deployed service people and sent him and his unit a box of snacks, socks, hygiene products, magazines and other difficult to get items.

The Posts’ good deed was rewarded by a battle flag sent from Weaver and his crew. Weaver’s sister, Kaley presented the flag and certificate to VFW and Auxiliary members.

The Judith Randolph – Longwood Chapter of the Daughters of the American Revolution hosted a Genealogical Workshop, “Delving into the... read more