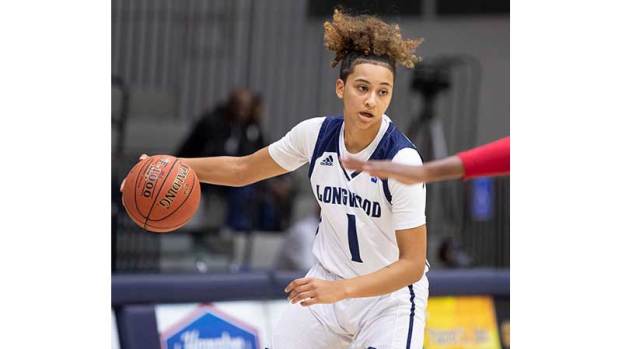 The Blue Hose held off a late-charging Lancers squad in the closing minutes of overtime to pull out an 82-77 win in Willett Hall.

Longwood (10-11, 6-6 Big South) leaned on McMakin and her prolific scoring to overcome a double-digit deficit in the fourth quarter.

Fourteen unanswered points gave the Lancers a 64-61 lead with 32 seconds to play. But Presbyterian guard Jade Compton knocked down a game-tying 3-pointer nine seconds later to tie the game and send it to overtime where Compton and Trinity Johnson keyed an early 7-0 that the Blue Hose rode to the five-point win.

McMakin finished 11-of-22 shooting from the floor with six 3-pointers. She scored 23 of her points after halftime en route to surpassing senior teammate Dayna Rouse’s previous school-record 34 points in last year’s Feb. 2 matchup against Gardner-Webb University.

However, McMakin’s effort was put to use largely helping Longwood overcome a sluggish first half in which Presbyterian forced the Lancers into 11 turnovers and entered the locker room at halftime with a 38-28 lead.

Longwood finally got back on track with a 20-point third quarter before the fourth-quarter run that eventually sent the game to overtime.

“From the jump, we were slow, but we have such a fighting mentality we were able to come back at the end,” McMakin said. “We fought hard in this game, and we have a lot to take away from today’s game. We just have to keep fighting. The game is never over until the horn goes off, and we learned that today.”

The loss brought the Lancers back to .500 in the Big South at 6-6 with eight league games left on their schedule entering their road game against Gardner-Webb Tuesday, Feb. 11.

The Lancers remain just two wins shy of matching the program record for Big South wins, set with an 8-10 finish by Longwood’s 2012-13 squad.

“Presbyterian was well prepared and attacked some of our defensive weaknesses,” Lancers Head Coach Rebecca Tillett said. “We do not have the defensive identity that we want yet. Yet is the keyword because we have an opportunity to prepare for another talented Big South opponent in Gardner-Webb.”

Joining McMakin in double-figures, one point shy of matching her career-high was sophomore forward Akila Smith. Smith went 8-of-10 from the floor with 17 points and added five rebounds and four assists to her performance.