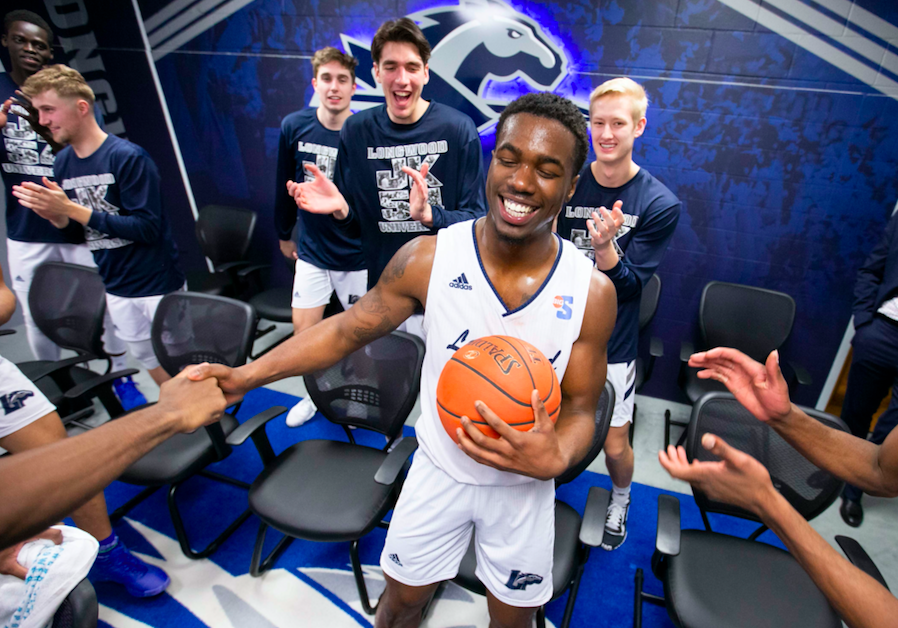 Longwood University sophomore guard DeShaun Wade is congratulated during the postgame locker room celebration Saturday night, Feb. 22, after he helped the Lancers earn their seventh win in their past 10 games. He holds the game ball he was presented moments before. Wade led the Lancers with 19 points in their 57-54 victory over visiting High Point University. (Photo by Mike Kropf/ Longwood University)

Saturday night in Willett Hall, a season-high crowd of 1,672 watched Longwood University’s men’s basketball team continue a turnaround that has seen the Lancers win seven of their past 10 games.

“It was really a grind. It was one possession at a time,” said Aldrich, whose 7-3 tear is Longwood’s winningest 10- game stretch in Big South play since the Lancers joined the conference in the 2012-13 season. “What carried us was a commitment and a desire to win.”

The victory continued a 10-game stretch that vaulted Longwood into sole possession of fifth place in the Big South standings with one game remaining. A top-five finish would be the program’s highest regular-season finish in its Big South era and earn the Lancers a first-round bye in the conference tournament, while a No. 6-8 seed would secure first-round hosting privileges for the tournament’s opening round March 3.

High Point refused to give in to Longwood’s weeks-long surge of momentum, overcoming a seven-point deficit to tie the score at 51 with 2:03 to play. Munoz stole the spotlight in the final minute, though, scoring Longwood’s final six points in the last 37 seconds of the game.

He began that takeover with a three-point play that broke the tie for good and capped it by hitting 4 of 5 free throws and grabbing a key defensive rebound on High Point’s second-to-last possession.

“Tonight was an emotional night for a lot of reasons, and for them to win the way they did, I thought it was symbolic of the season they’ve had,” Aldrich said. “They just continued to fight. I got emotional in the locker room, and as I told them, I’m just extremely proud of them and the fight they’ve consistently maintained throughout the season. To stick with it is just phenomenal. Where we are right now is 100 percent due to their character and due to their leadership.”

That leadership came from throughout the lineup Saturday night, most consistently from Wade, who provided a physical presence that matched High Point’s notoriously brutish style of play. The 6’2”, 210-pound guard hauled in seven rebounds, hit 6 of 8 shots from the floor and sent Longwood into halftime with a lead thanks to a stretch from the 4:38 mark to the buzzer in which he scored 11 points.

“I’ll tell you right now, when we came out we weren’t the tougher team,” Wade said. “But we nipped that in the bud real quick. I think closing out the first half, we knew we had to be that, so that’s what we did. From that point, I think we were the tougher team for the rest of the game.”