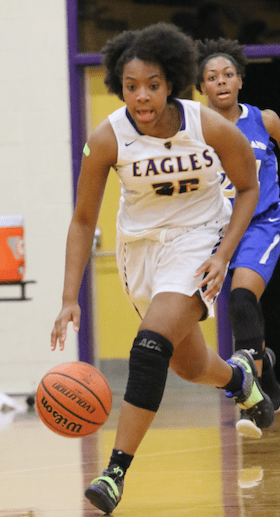 Prince Edward County High School’s varsity girls basketball team lived up to its seeding in the first round of the Region 2A Tournament and extended the 2019- 20 season for a squad garnering two all-district accolades.

Prince Edward Head Coach Kimberly Price-Chambers said she was disappointed and scared with how things went in the first half of Saturday’s contest.

She described their overall play as good team ball.

She added that when center Haniyyah Johnson got in foul trouble, Andrea Minter came in and picked up the slack, which gave the team an extra boost.

Leading the Lady Eagles (12-11) in scoring was DiNasia Scott, with 13 points. Ke’Mya Rux added 10 points, and Kayleerae Folz had eight.

With a win Monday, Prince Edward would play in the semifinals Wednesday, Feb. 26.

Representing the Lady Eagles among the 2019-20 All-James River District honors for girls basketball were Scott, who made the first team, and Folz, who made the second team.

“I am very pleased because these two young ladies showed leadership on and off the court,” Price-Chambers said. “The girls looked up to them for leadership, and they were very good ball players. They had determination and had a will to win. They would push their teammates to be better.”