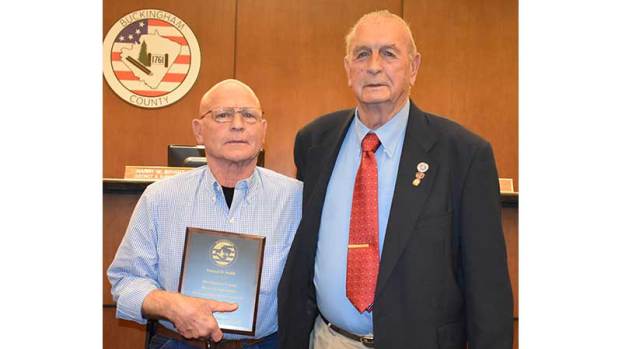 From left, Sammy Smith receives a plaque from Board Chairman Harry Bryant for his years of service on the Buckingham County Planning Commission at the Feb. 10 Board of Supervisors meeting.

The Buckingham County Board of Supervisors is considering constructing a proposed firearms training facility for county law enforcement.

Deputy Forest Lawhorne from the Buckingham County Sheriff’s Office gave a presentation to the board regarding the proposed facility at the Feb. 10 Board of Supervisors meeting.

Lawhorne said to the board that the county’s law enforcement officers currently travel to Prince Edward County to conduct firearms training of any kind. In an interview with The Herald, Lawhorne hoped the proposed facility would allow for specialized training to law enforcement and animal control officers in the county.

Lawhorne was instrumental in building a similar training facility during his time spent at the Fluvanna County Sheriff’s Office. He said a firearms training facility would not only save the sheriff’s office money in maintenance and fuel costs but would benefit county citizens with better-trained officers serving and protecting residents.

As timber would have to be cleared from the land in order for construction to commence, the board approved of the concept of the range and permitted Lawhorne to further his research into a possible firearms training site, although no funding for the site was approved.

Lawhorne said he hopes to return at March’s meeting with appropriate permits and more details on the project for the supervisors.

Other notable agenda items from the meeting included:

The presentation of a resolution in memoriam of Brady Jones Jr. Jones was a member of the Mulberry Grove Baptist Church, where he served as a deacon, treasurer and Sunday School teacher, and spent many years as a second-generation logger of Brady Jones and Sons Logging. He took great pride in his work and was known for his generosity and kindness to all. Dozens of Jones’ family members came forward to accept the resolution in Jones’ memory.

The board also took a moment out of the board meeting to recognize Sammy Smith for his time served on the Buckingham County Planning Commission. Smith was present to accept a plaque from the board for his years of service to the county.