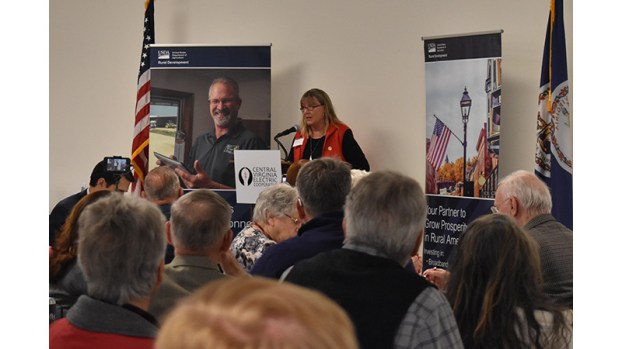 USDA Rural Development State Director for Virginia Beth Green announced $28 million in funds to expand high-speed broadband infrastructure in rural Virginia Friday. Central Virginia Electric Cooperative will use the money to partially fund a fiber buildout project that will first be implemented at the Curdsville substation in Buckingham County. (Photo by Alexa Massey)

Area to benefit from $28M in broadband funds

Buckingham County residents will be the first to benefit from $28 million in funding to expand high-speed broadband infrastructure in rural Virginia.

Approximately 200 county citizens and guests from across the commonwealth gathered at the Buckingham Agriculture Resource Network (BARN) building in Buckingham County Friday, Feb. 28, to attend a celebration of rural broadband held by the U.S. Department of Agriculture (USDA) and Central Virginia Electric Cooperative (CVEC).

The news is just one of many funding announcements in the first round of USDA’s ReConnect Pilot Program investments.

“Funds will be used to build the fiber first here in Buckingham County,” Gay announced.

She said the Curdsville substation will be the first to undergo the fiber build process in the summer of 2020. Other substations in the first round of fiber build this summer include sites in Pamplin, Cartersville and Stonewall.

In a release, CVEC highlighted that it leases its fiber to its wholly owned subsidiary, Central Virginia Services, Inc., which does business as Firefly Fiber Broadband.

Representatives of several government officials were present at the celebration to send messages on behalf of elected officials advocating for broadband from Richmond and Washington, D.C., including reps for U.S. Congressman Denver Riggleman, U.S. Congresswoman Abigail Spanberger and Virginia State Senator Mark Peake.

Office of the Governor Broadband Policy Specialist Kyle Rosner was also present on behalf of Virginia Governor Ralph Northam to congratulate CVEC on the awarded funds.

According to Goodwin, Peake presented a bill this year to make it a policy of the commonwealth to allow broadband transmission on the existing electric infrastructure.

“I’m happy to tell you today that it has passed both chambers in the General Assembly and is headed to the governor to be signed. And when he signs it, that will become law July 1,” Goodwin told the crowd.

Buckingham County Board of Supervisors Vice Chairman Don Matthews, whose district will be the first to reap the benefits of the fiber project, expressed his happiness and excitement to the audience Friday.

Matthews said his fellow supervisors and other local representatives were instrumental in advocating for broadband coverage in the area. He felt the implementation of high-speed broadband would benefit county residents for years to come.

Previous Buckingham supervisor and current CVEC Director Dr. Brian Bates and CVEC President and CEO Gary Wood were also present at the celebration to express appreciation for USDA’s funding and the countless organizations and individuals who have helped develop the fiber project.

“Everyone here has a role in this, and we appreciate it,” Wood said.

Prince Edward County has advertised that the Board of Supervisors will hold a public hearing Tuesday, March 10, with regard... read more