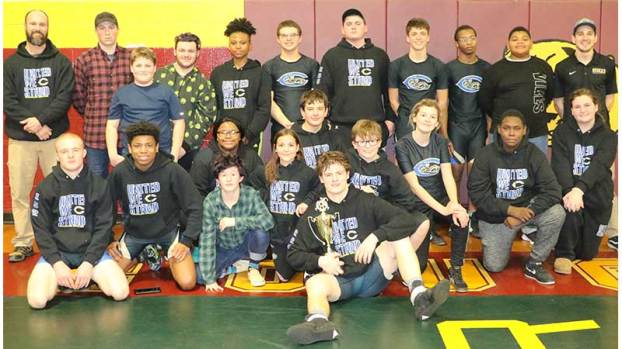 The Dukes rule the district mat

Cumberland County High School’s varsity wrestling team was well-represented at the 2020 James River District Tournament Thursday, Jan. 23, at Nottoway High School. The Dukes made their presence known on the mat where they produced three individual district title-winners on the way to clinching the tournament championship as a team.

This is the first time Cumberland has won the district tournament since 2013.

“We expected it from Trevor,” Bristol said. “That we knew was coming. This was Blake’s first year as a starter on the varsity level. The person who he was training with, (Kaijhaun “K.T.” Trent) … went to states for us last year, but Blake never had a varsity match. So big shoes to fill, and he stepped up in a big way.”

The Dukes return to action Saturday, Feb. 1, at Nottoway for the Southside Scuffle in an event that will pose a challenge similar to the district tourney.

Eagles aim to have swimmers at states