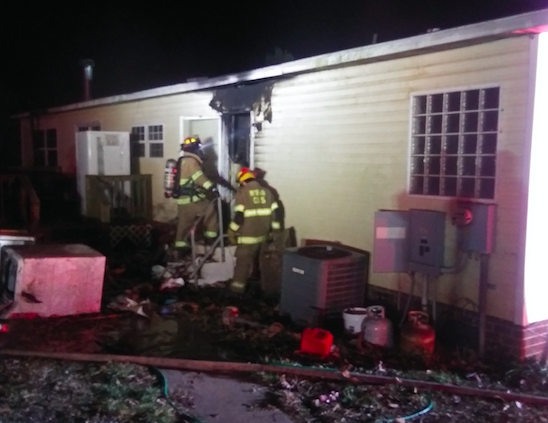 Firefighters attend to a structure fire involving a dryer at a home in Meherrin early Thursday morning, Jan. 2.

“Around 3:15 a.m. Meherrin Fire & Rescue along with Hampden-Sydney Fire and Keysville Fire were dispatched to 11 Rainbow Lane for a reported dryer on fire inside a house, with flames visible,” Meherrin Volunteer Fire & Rescue Inc. Fire Chief Trey Pyle said. “On arrival, crews found the laundry room on the rear of the house well involved, with fire visible from the outside of the structure. Crews were able to quickly extinguish the fire and keep the fire damage contained to the room of origin.”

He said that within 5-10 minutes, the fire was under control.

“There was significant smoke damage throughout the rest of the structure,” he said. “There were injuries, (but) the family did not require any assistance.”

Pyle noted that no one had to go to the hospital.

The fire started around the vent pipe going outside, the chief said.

Weighing the pros, cons of VGA

Editor’s note: This is part two of a two-part story covering the Prince Edward County Board of Supervisors’ extended discussion... read more