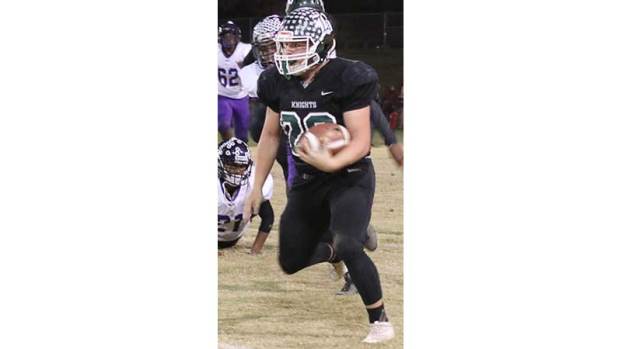 Buckingham County High School senior Walter Edwards headlined his team’s 2019 All-Region 2B recognition by making the first team as both a running back and linebacker. (Photo by Lyla Wood)

Buckingham County High School’s varsity football team drew seven 2019 All-Region 2B selections, including three on the first team after a season in which the Knights advanced as far as the regional semifinals and finished 10-2 overall.

Knights making the all-region first team included senior Walter Edwards, selected at both the linebacker and running back positions, and junior Xavier Copeland, selected at defensive back.

“I think those guys did a good job all year, and they were deserving of it,” Knights Head Coach Seth Wilkerson said of his team’s all-region honorees.

He noted that his juniors who were recognized, Toney and Snoddy, are “still going to have a good shot at being first-team (all-)region next year and probably a little bit better.”

Edwards finished the 2019 season on defense with 88 total tackles, including 14 tackles for a loss in yardage and four sacks. On offense, he finished with 124 carries for 1,464 yards and 11 touchdowns.

Copeland ended the year with 23 total tackles and three interceptions on defense.