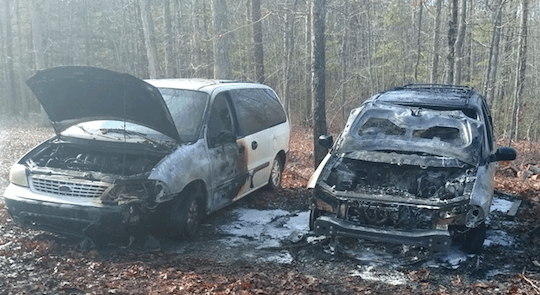 CVFD units arrived in the 300 block of Clinton Road in Cumberland to find a heavily involved vehicle. The fire spread to a nearby van before it was extinguished. (photo by Ben Pfeiffer)

The Cumberland Volunteer Fire Department was dispatched to a residence in the 300 block of Clinton Road on Thursday afternoon, Jan 16, in reference to a vehicle fire.

Pfeiffer said the blaze was accidental, likely caused by an engine/ electrical malfunction.

The homeowner attempted to put out the flames himself using a fire extinguisher, Pfeiffer added, but was unable to do so.

The fire began to spread to another van parked just a few feet away from the heavily-involved vehicle before units arrived and extinguished the blaze.

Engine 24 and Tanker 22 responded to the incident.