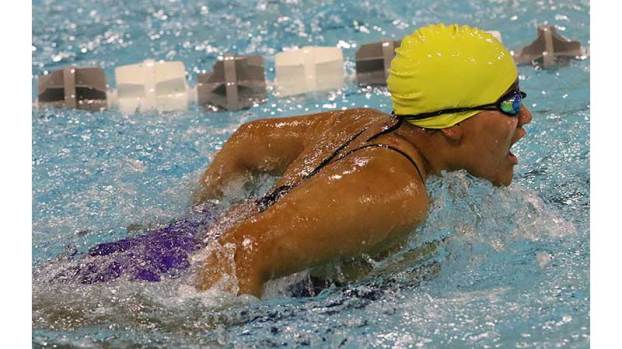 Eagles aim to have swimmers at states

Prince Edward County High School’s varsity swimming program has produced 19 team victories during the 2019-20 season, with 12 of those wins coming from the girls squad.

Both the girls and boys teams feature promising swimmers who give Prince Edward the prospect of representation at the state meet this year and in the future.

Stimpert is a senior, and has qualified for state competition in the 100-meter backstroke.

Hemmer said there are no other Prince Edward state qualifiers yet, but that could change during the second full week of February when the teams compete in the Region 2A Championships.

At the regional meet, the top four finishers in relay events qualify for states along with the top five finishers in individual events.

Citing another key standout in the pool for the Lady Eagles, Hemmer highlighted senior Timara Smith.

“She’s been just trimming down her 100 butterfly time,” the coach said. “Last meet, she just (took) another 4 seconds off. Pretty much all season she’s been just cutting time.”

A key standout already for the Prince Edward boys is a swimmer who will become eligible for varsity competition next season — Barrett Motter.

Prince Edward’s swimming teams have one more event listed on the schedule for the regular season before regionals and states in February.

Stating her goals at present, Hemmer said, “We’re definitely hoping to send some relays to states. We’re really just hoping for them to have a good taper and then have a good regional meet. We’ve been working hard all season, and we’re looking forward to a taper where we can rest a little bit, be nice and recovered and refreshed for (regionals).”

Hemmer brings experience as both a swimmer and swimming coach to her role as Prince Edward head coach.

“I swam in high school and was a coach for a summer league all throughout high school, and then I also coached for the YMCA here probably back in 2008 or 2009,” she said, adding she has also helped out with the youth summer program called FAST — Farmville Area Swim Team.