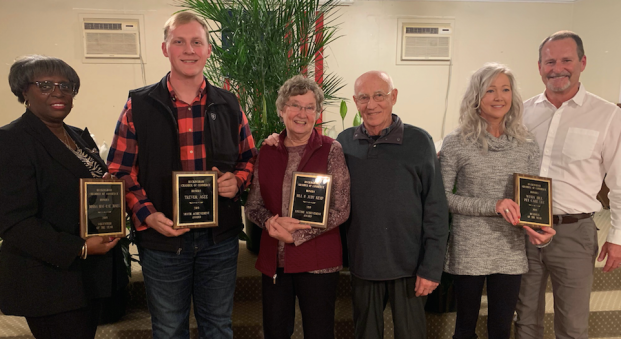 The Buckingham Chamber of Commerce honored four community leaders and one business during its Annual Awards Banquet for Chamber Year 2019.

“It is with great pleasure that I nominate Bill and Judy Kemp for the Buckingham Chamber of Commerce Lifetime Achievement Award,” wrote Sue Miles, who nominated the couple.

While the Kemps moved to Virginia in 1974 and Buckingham in 2008, their service to their communities, spans decades.

“In 1988, after learning about the national Habitat for Humanity program through a Reader’s Digest article, both Judy and Bill agreed this program and its principles worked for them. Working with Presbyterian minister, the Rev. Greg Gregory, in Ashland…they began laying the groundwork for Hanover Habitat for Humanity. They also became involved with volunteer work in Appalachia, with an ecumenical organization called Christian Appalachian Project. This project brought volunteers into Appalachian communities for home repair and reconstruction,” Miles wrote.

Miles said the couple became involved in Habitat ‘builds’ and started caravanning with others who were known as Habitat Care-a-Vanners.

“A bit like gypsies, they traveled from coast to coast. South in the winter, north in the summer, building Habitat houses in 29 states. When the Kemps decided they needed a home base, lucky for us, it was Dillwyn. Along with continuing their volunteer work in Appalachia, the Kemps now are working with the Piedmont Area Habitat for Humanity (formerly known as Farmville Area Habitat for Humanity) and specifically the Buckingham County affiliate.

McRae Jones was nominated by Thomas Jordan Miles III for the Volunteer of the Year Award.

“Donna’s selflessness, her dedication to her fellow man, and her willingness to donate her time for the betterment of the lives of others’, serves to meet the measure, as President John Kennedy stated, when we sought to put a man on the moon,” said Miles, who serves on the Buckingham County Board of Supervisors representing District 4/Maysville District and serves as Chamber Vice President. “Kennedy said, this nation chose this goal and many others, ‘not because they are easy, but because they are hard, because that goal will serve to organize and measure the best of our energies and skills.’ And the community engagement and involvement of Donna McRae Jones embodies this call.”

As leader and Chairman of the Habitat for Humanity Buckingham Build, Donna has assisted with and overseen the fundraising and public relations for the construction of five new homes and one home rehabilitation, literally helping put vulnerable people in secure and safe homes, helping our neighbors in Dillwyn and across Buckingham succeed, Miles said. “And, this month marks her initial term in the office of President of the Board of Directors for the Piedmont Area Habitat for Humanity, one of few Buckingham residents to hold this leadership position.”

Betty Shapiro nominated Windy Hill Pet Care as the Business of the Year.

“Windy Hill opened in early 2017 and I must say they keep growing and growing,” she said, noting, “Word of mouth has been letting people know the super place, great service, and comfortable feelings you get when you board your dog at their facility. Jon and Kristen Ober, the owners, are the keepers of the troops.”

She said their kennels are state of the art and the play yards are separated by who can play, “with seniors who just mill around and need extra attention or the jet set who need lots of running space and exercise time. If you come at any time you are apt to see Jon or Kristen or both out there playing catch, sitting and holding, petting, rubbing, and giving love and snacks to their boarders.”

She said she has seen Agee, a Glenmore resident, “grow into a leader and respected friend among his peers” when he was in the Buckingham FFA.

“Trevor is a young man who has worked hard academically and outside of the classroom. Trevor graduated from Buckingham County High School as an honor graduate in 2019 with a 3.8 GPA. Trevor is also an active member of the Glenmore Fire Department following in his grandfather and father’s footsteps. Trevor was Glenmore’s first junior firefighter to join the department in November of 2018. Trevor continues to improve his firefighter knowledge by taking EMT classes. Trevor aspires to grow in the firefighter profession throughout his life.”

Davis noted Agee was an active member of the Buckingham FFA, holding several officer positions with the highest being president his senior year, accumulating several accolades.

All five new members of the Cumberland County Board of Supervisors gathered for their first meeting of the year Jan.... read more