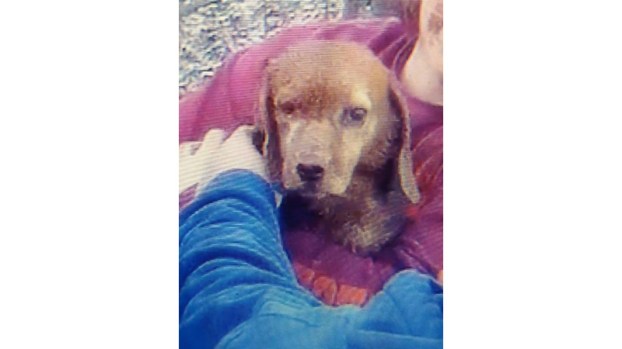 This image, captured from the helmet cam of an AVFD firefighter, depicts a beagle puppy moments after being pulled from an abandoned well on Cartersville Road.

Members of the Arvonia Volunteer Fire Department (AVFD) in Buckingham sprang into action the evening of Sunday, Jan. 26 to rescue a dog that fell 10 feet into an abandoned well.

According to AVFD President Steve Toney, the fire department received a call regarding a dog that had fallen into a hole on Cartersville Road. Firefighters arrived to find a small beagle had fallen headfirst into an abandoned well. The dog was struggling to keep its head above the muddy, cold water.

AVFD Firefighter Clinton Toney, one of the fire department members involved in the rescue, said units were able to use a rope and various other tools to pull the pup out of the 10-foot hole. Clinton said the canine was reunited with its owner and received no injuries from the incident, although the dog did need to be warmed up after the chilly accident.

“It is extremely rare to receive this sort of call, and the amount of teamwork that went into this rescue makes me extremely proud to be a part of this department,” Clinton added.