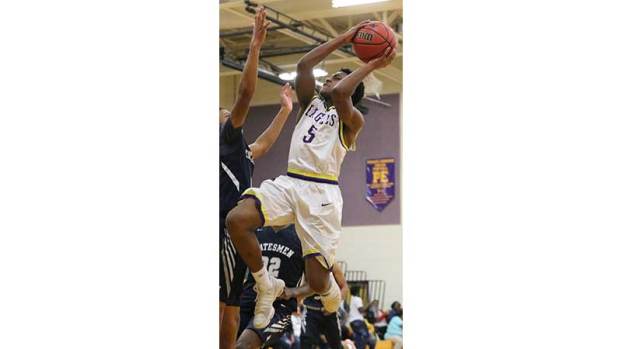 Young Eagles ‘building from the ground up’

The 2019-20 Prince Edward County High School varsity boys basketball team is young, but it started off its season the right way — with a win.

“We had to shake off some rust,” Prince Edward Head Coach Michael Jackson Jr. said. “I think knowing it was an official game, guys came in kind of nervous and wanting to handle everything themselves but soon learned to rely on their brother, and we came through with the victory.”

This is a notably different Eagles team from the one that went 9-11 last season, reaching as far as the first round of the Region 2A Tournament where they fell 54-47 to host Poquoson High School.

“We lost a bunch of seniors from last year,” Jackson said, listing Rodney Sprague, Rah’Quan Payne, Abraham Braxton, A.J. Lewis, Jarrel Robinson, Tahj White and Jair Haskins, the last of which the team lost due to injury at the beginning of the 2018-19 season.

The seniors include Jahieam Watkins, Christopher Hicks, John Pride III and Isaih Dailey, the latter of whom is a multi-sport star who has signed to play NCAA Division I baseball for Virginia Military Institute.

The sophomores include Kiyou Jones and Nate Reed, the standout quarterback on the varsity football team.

“We are a very young team this year,” Jackson said. “We’re building from the ground up, and I believe we have a strong foundation for the future.”

Given the squad’s youth, the question of who will lead the Eagles on the court this season has not yet been definitively answered.

“We are still establishing who the leader of this team is,” Jackson said. “Like I said, we are young, a bunch of guys are from the (junior varsity) unit, but Isiah Dailey and Jake Simon have really stepped up for this team thus far.”

Dailey led Prince Edward with 26 points against Randolph-Henry, while Simon scored 16 and Reed added 12. Chipping in with nine points apiece were Delaney and Banks.

Jackson noted that his team is not alone in being on the young side.

“I believe besides Buckingham, the whole district is fairly young, so the district is up for grabs, but it all depends … (on) who all shows up to play.”

The Eagles (1-0) returned to action Monday, Dec. 9, with a road game against Altavista Combined School, and they host Nottoway High School on Friday, Dec. 13, at 7 p.m.