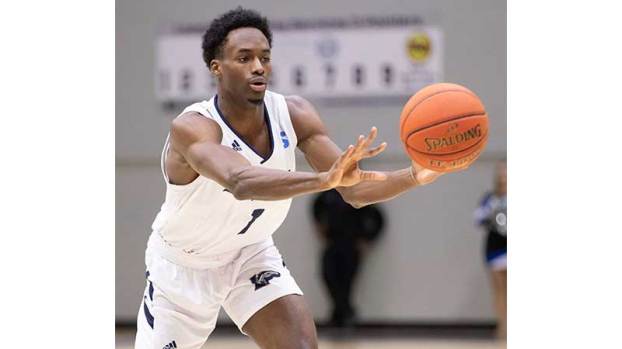 Longwood University sophomore forward Christian Wilson, pictured from a previous game, scored eight points and grabbed four rebounds off the bench Friday night, Nov. 29, during the Lancers’ 69-51 loss in California to the University of the Pacific. (Photo by Mike Kropf / Longwood University)

A week-long road trip in California presented Longwood University’s men’s basketball team with many lessons but no wins to show for it, officials noted in a Longwood Athletics press release.

And while Longwood Head Coach Griff Aldrich extolled the value of discerning said lessons from the non-conference portion of the schedule, he noted it did little to soften the blow from Friday night’s defeat at the hands of West Coast Conference dark horse University of the Pacific, the release cited.

Officials said in the release that behind a game-high 17 points from Gary Chivichyan, Pacific (7-3) extended its nearly perfect home-court campaign at Longwood’s expense, pulling away from the Lancers 69-51 Friday, Nov. 29, to improve to 6-1 at the Spanos Center.

Chivichyan spearheaded a strong shooting performance from the Tigers, finishing 7-of-14 from the floor with three three-pointers to solve a Lancer defense that entered the matchup as the Big South leader in opponent scoring average and second in both field goal defense and three-point field goal defense, the release stated.

“It was really disappointing; I thought we really lost focus on our offensive principles in the second half,” Aldrich said in the release. “They started to make a run, and I can think of three possessions almost in succession that were really tough. DeShaun (Wade) took a really hard shot, we had Shabooty pick his dribble up and turn it over, and several plays right in a row where if (Pacific) is on a run and you’re not even getting the ball up on the rim, that’s a real problem.

“But number one, credit Pacific,” the coach continued in the release. “I thought they picked up their intensity. They did a much better job, defensively, being more aggressive.”

The release noted that the loss comes at the midway point of a season-long six-game road swing for the Lancers, who have not played at home in Willett Hall since a 78-53 win over Randolph College on Nov. 15. Since embarking on the road stretch, the Lancers have traveled to two different time zones to face Northern Illinois University, University of California (UC) Riverside and Pacific — the three of which boast a combined 19-7 record.

“We said this to the guys: the goal of these games right now is to improve,” Aldrich said in the release. “We have learned a lot of lessons about this team in the non-conference (schedule). Unfortunately, some of them we’re now learning with losses compared to earlier when we were learning lessons but escaped with wins.

“The big thing for us is we have to understand that we need to be consistent at what we do,” he continued in the release. “We have to be committed to executing our principles.”

However, after opening the season among the Big South’s best three-point shooting teams, the Lancers’ recent shooting woes continued Friday as they shot just 31.3% (15-of-48) from the floor against Pacific for their second lowest clip of the season, the release cited. Included in those 15 field goals were nine three-pointers — including three from senior Shabooty Phillips — but Pacific offset those triples with a season-high 12 of its own.

Officials stated in the release that the Lancers returned to form briefly at the end of the first half when they knocked down four consecutive three-pointers in the final three minutes, 38 seconds to enter halftime on a 12-3 run and trailing by only three points, 35-33. Phillips hit two of those, and Juan Munoz finished off the run with a trey in the closing seconds. But that momentum did not continue into the second half as Pacific stormed out of the locker room with a 21-2 run to extend the lead to double digits for good.

That game-breaking run featured 10 points from guard Gary Chivichyan and only ended when Phillips and fellow senior JaShaun Smith bookended the 10-minute mark with back-to-back three-pointers, the release highlighted. But Longwood’s counterpunch was only a glancing blow, as the Tigers milked the clock and took advantage of free throws to cruise on their double-digit lead the rest of the way.

“We said we need to move the ball quickly,” Aldrich said in the release. “One of our core principles is to try to beat your man, but drive for a teammate. I thought we didn’t do a great job of that. You think about the times we did, when we did drive for a teammate, we were getting shots and the ball was moving and (Pacific) was flying around. We didn’t get that in the second half, we really didn’t. I think that was kind of us not executing at the level we needed to.”

The release stated that the drought-stricken Lancers’ missed shots played into the hands of one of the nation’s top rebounding teams as Pacific hauled in 10 offensive rebounds and converted those into 13 points. Ranked sixth nationally in rebounding margin, big-bodied center Amari McCray  — all 6 feet, 9 inches, 265 pounds of him — and fellow bruiser Shaquillo Fritz led that charge in the paint with a combined 13 boards, including three on the offensive end by McCray.

Those extra possessions allowed Pacific to sink more three-pointers against the Lancers than any team this season, the release noted. Only George Mason University, which hit 6-of-14 three-pointers in Longwood’s Nov. 8 road loss in Fairfax, has shot more efficiently from three-point range against Longwood this season.

The Lancers (4-4) begin the second half of their non-conference road gauntlet this Wednesday, Dec. 4, when they head to North Carolina Agricultural and Technical State University for a 7 p.m. tipoff, the release cited.