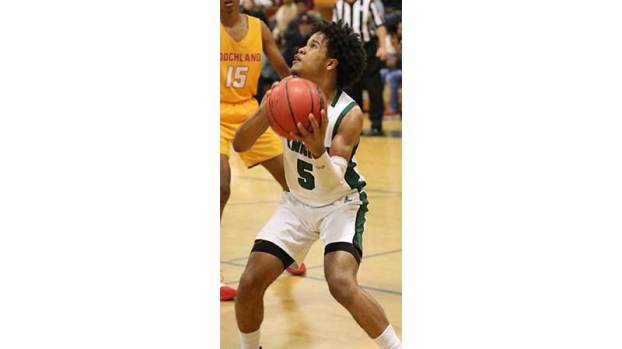 Buckingham County High School guard Amari Toney is back for his junior season and is expected to be a primary leader for the Knights during their 2019-20 campaign. (Photo by Titus Mohler / Herald)

Knights hungry for more success on the court

A large group of returners will look to put the Buckingham County High School varsity boys basketball team in the hunt for both a James River District championship and an even deeper run in the playoffs during the 2019-20 season.

Last season, the Knights finished with an 11-14 overall record after advancing as far as the second round in the Region 2C Tournament where they fell 54-49 to host Gretna High School. Buckingham also placed fourth in the district.

A few key players from the 2018-19 Knights are gone now as forward Jalen Chambers has transferred to another school and guard Andrew “A.J.” Johnson Jr. and forward Deamonte “D.J.” Lassenberry have graduated.

The 2019-20 roster is populated with a lot of familiar names, though.

“We have a good core coming back,” Buckingham Head Coach Taylor Boyers said.

The Knights will also enjoy the return of junior forward Gerry “Tae” Toney.

“He was out last year because of injury,” Boyers said. “He played varsity as a freshman, but he’s back this year. He’ll be one of our key guys, Amari Toney as well. He’s back. He started every game for us since he’s been a freshman. He was All-James River District last year, so those two will be our main guys this year.”

The team is comprised of eight juniors, one senior, one sophomore and one freshman.

Explaining what Gerry Toney and junior guard Amari Toney bring to the team that positions them as leaders, Boyers said, “Just their experience. They’ve played in some playoff games. Tae’s a vocal leader for us. He’s one of the leaders on the football team. He’s going to be a captain for us, and then Amari as well. He’s had a lot of experience to be a junior. None of them have played a lot of minutes but (have) been in some big games for us and hit some big shots and closed out games, so those two guys are going to be key for us this year.”

A third team captain will be junior forward Xavian Gough.

“He had a big year in football, and then last year as well in basketball, he really played well down the stretch for us and gave us some really good minutes,” Boyers said. “I think he had career-high(s) in points and rebounds in a playoff game, so he played well to close the year, and he’s going to be another one to have a good season for us.”

Buckingham opened its season Friday, Dec. 6, at Central Lunenburg High School with a 94-45 victory. Next, the Knights (1-0) host Bluestone High School on Tuesday at 7 p.m.