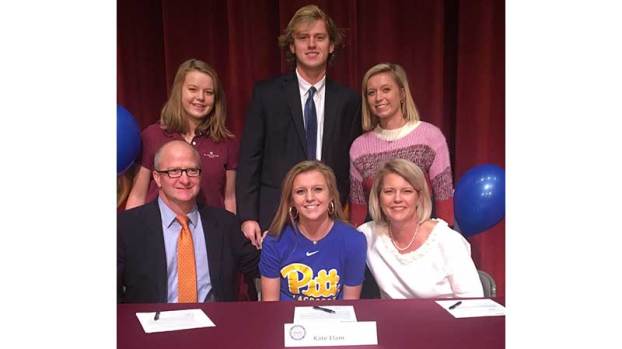 Elam will play lacrosse for Pitt

Kate Elam, of Pamplin, will be taking her lacrosse talents to the University of Pittsburgh next year, a decision she formally announced during a recent signing ceremony in Charlottesville at St. Anne’s-Belfield School where she attends.

She noted that she has played lacrosse for five years now, starting when she was in sixth grade. Playing at the college level has been her goal since eighth grade.

Elam made her decision Oct. 31, with the ceremony following a couple weeks later, and she said that being able to commit to play college lacrosse “was just a dream, and just getting a school like Pittsburgh, to sign there was just unbelievable, and I just had to pinch myself.”

She had a few options she considered before ultimately making her decision.

“I was looking at a few places,” she said. “I was thinking about maybe William & Mary, but Pittsburgh was my first place, so they were the first ones to call me, and so when they called me, I just automatically said, ‘Yes.’”

Asked what made the NCAA Division 1 Pitt Panthers her top pick, she said, “I just love that they’re in the (Atlantic Coast Conference) ACC, and it’s a new program, so we can start as competitive as possible. We get to put our first imprint on it, and I think just playing at the most competitive level of lacrosse is just really cool for the conference and then also playing against the best teams and being able to compete as a new team there.”

Explaining the plan for Pittsburgh’s lacrosse program, Elam said, “We’ll be starting my sophomore year, so all the girls in my class will redshirt this next year, and then we’ll play when we’re sophomores.”

She noted not being sure yet where Panthers coaches will use her on the field.

“It’s kind of up in the air right now, which is kind of exciting,” she said. “I have played attack, a little bit of midfield. They have put me as a midfielder right now, and they just said they love my athleticism, and they could just see me on any side of the field, so I’m excited just to see where I end up.”

Also yet unknown is what academic path Elam will choose.

“I’ve been thinking maybe pre-law, but I’m not really sure,” she said. “I’m just throwing it up in the air. I’m going to see what I like when I get there.”

Elam’s mother, Elizabeth Elam, expressed her excitement for Kate on behalf of herself and her husband Harry Elam Jr., Kate’s father.

“This has been a long, hard journey,” Elizabeth Elam said. “We laugh and say that we’ve gone to a million and two camps. Kate is just a fighter. She has worked from day one. This is her dream, her goal, and my job was just to drive her to place to place. She just peaked right at the right time. She peaked at the Pitt camp, and she was on fire, and all the things came together right at the right time, and we are so, so proud of her. This is all about grit and determination, and Kate proved to have it all, so we’re thrilled.”

Cumberland County High School’s varsity girls basketball team will enter 2020 with an overall record of 5-2 so far this... read more