It’s beginning to look a lot like Christmas. The holiday season’s still a month away, but at tonight’s meeting of the Prince Edward Christmas Mother (PECM) in the Moton Museum auditorium, there’s more than a few Santa hats in the room.

Christmas duo Pattie Cooper-Jones and Chuckie Reid are two of the red hatters. This year’s Christmas duo is a first for the Christmas Mother program, now in its fourth year.

“We’re the face, or faces as the case may be, of Christmas Mother,” Cooper-Jones comments. “I like that they asked us to do it as a duo.”

“We thought it would be good to have a town-county connection,” Prince Edward Commonwealth Attorney Megan Clark comments.

Clark was the 2017 Christmas Mother. Now she’s treasurer for the group.

The Farmville Junior Woman’s Club (FJWC) got the ball rolling.

“It started with the six of us — all volunteers and zero money,” Vice President Kate Pickett Eggleston explains.

“In the summer of 2016 they asked Lauren Showalter and myself to join them,” Eggleston explains.

Meetings were held in the basement of Farmville Presbyterian Church.

“We all brought our kids,” Eggleston says.

“The volunteers for Christmas Mother are primarily mothers,” 2018 Christmas Mother Navona Hart says. “I could see that their focus was to make sure mothers in the community without the financial means could have a good Christmas too.”

Once this small group of women got Christmas Mother rolling, it didn’t take long for it to snowball.

It was, in fact, what PECM organizers hoped it would be: a joint effort with Social Services, churches, businesses, civic organizations and schools all taking part.

“Barbara Rose Johns Farmville/Prince Edward Community Library has been a big help,” Eggleston adds. “They gave us a meeting space and kept applications on hand.”

Tonight’s meeting includes plans for Christmas Mother application day set for the first week in November. Applicants must bring proof of Prince Edward residency, birth certificates/proof of custody for each child, and proof of assistance (SNAP, Medicaid or disability) or proof of income.

In the blink of an eye, the committee members at tonight’s meeting will be as busy as Santa’s elves. It’s time for shopping!

“I went shopping with Kate one day,” Haga recalls of her 2016 Christmas Mother experience. “We went to Richmond and bought every ball in the store! The car was so loaded there almost wasn’t room for the driver.”

“We have very little overhead,” Eggleston adds. “Really the only overhead we have is storage space.”

As toys are purchased, they’re placed in a storage unit to await the big event —distribution day.

“They run a distribution like you wouldn’t believe,” Haga comments of the inaugural event in 2016.

The event is held at the Fireman’s Sports Arena.

“The sports arena is set up with tables with each section for a different age group,” Eggleston explains. “When parents come to shop, they’re given a number, and when their number is called, they’re paired up with a personal shopper.”

Like Santa, each personal shopper has a list, and they can check it more than twice according to the number of children listed.

“The same volunteer stays with each parent the whole time they’re there,” Haga continues. “Each volunteer had a clipboard with the family’s name and each child’s name. They would take them to a table and tell them how many gifts they could choose.”

Local restaurants added to the festive event by bringing food for parents and volunteers.

“We want to make it a unique experience,” Eggleston notes. “We invite parents to come in to shop and have breakfast — we want it to be a fun time.”

There are some extra tables with slightly used items including coats. Wrapping paper, tape and bows are also provided.

“During the first hour and a half last year, we served 89 parents — that’s 220 kids,” Eggleston relates. “It took a lot of work and volunteers to make that happen.”

“During the distribution there was a mother who was able to get the doll her daughter really wanted for Christmas,” Haga recalls. “That mother was so excited she started jumping up and down.”

“There are so many reasons to get behind something like Christmas Mother,” Hart comments. “That’s what community is really all about — supporting the people who need it.”

“The whole Christmas Mother experience stood out for me,” Clark concludes. “In our day-to-day lives, we often forget how blessed we are. To be able to help our community out in such a small way is truly awesome.” 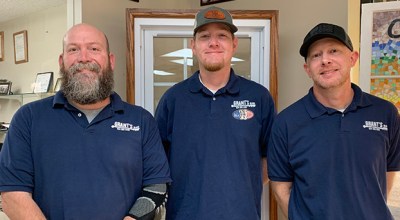