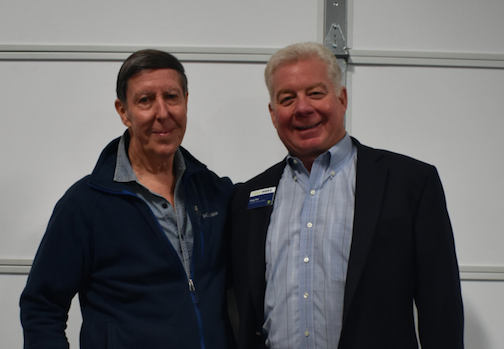 The new, 7,000 square-foot facility is more than twice the size of the previous FACES location, providing the organization with a much larger amount of space to store products, including refrigerated and frozen foods.

Volunteers from across the area gathered at the new location as early as 7:30 a.m. in order to prepare for the distribution. When clients began arriving at 8 a.m., volunteers assisted them by helping to push a cart and offering various fresh and packaged foods and drinks for clients to take home.

As the distributions wrapped up in the early afternoon, area residents and friends of FACES gathered to celebrate and share memories from the organization’s many decades of service to the community.

The weather on the morning of the grand opening consisted of cold temperatures and rain. FACES Food Pantry President Ellery Sedgwick noted that the weather served as a great example of one of the new building’s many benefits.

“Typically before distribution starts there are about 40-50 people standing outside. This morning they would have been wet and miserable,” he commented, referring to the old building that FACES used to reside in. “But because we have the new facility we were able to invite them in to a warm room and give them a seat and make them comfortable before the distribution started. The important thing about it is it’s a mark of respect to the clients to be able to do that rather them having them stand out in the rain. So, we’re making progress and this building is a great leap forward for us.”

Sedgwick highlighted that it often takes more than 50 volunteers to get food out of the door during the weekly distributions.

Sedgwick added that FACES was founded in the early 1980s, with many founders present at the celebratory reopening. He also mentioned that the organization had moved location at least five times since its founding, hoping that the new Commerce Road building would be able to serve as a permanent home.

“At this point, we distribute well over 1 million pounds (of goods) a year. We’ve calculated the retail value of that, and it’s over $1.5 million of food that goes out of this facility annually to over 1,000 families from the local communities.”

He also stated that the new facility will allow FACES to triple the amount of produce it has been able to store in the past and double the amount of meat protein that it is able to store. In addition, ownership of the new facility will allow for expansion of other programs that FACES puts together including the Backpack Program that sends children in need home with a backpack filled with kid-friendly foods in order to supplement meals over the weekend. The new facility may also allow for the creation of new programs.

“We believe that to whom much has been given, and we have been given much, much should be expected,” said Sedgwick.

One organization that is associated with FACES is Feed More, a food bank that collects and distributes surplus food to food pantries across 34 counties and cities, of which FACES is one of the largest. Feed More CEO Doug Pick was present at Saturday’s celebration and spoke about the relationship between the two organizations.

“We had to find good partners,” Pick stated in reference to the estimated 300 agencies that Feed More works with, “FACES I can promise you was at the very top of the list. With close to 300 agencies, FACES is at the top of the list, and it’s things like dedication, leadership, volunteer management, reach … we wanted to go find folks who live where they live with big hearts and big capabilities to partner with them and invest in them … we’re proud to be a part of you. You’re not part of us, we’re part of you.”

There will be no change in the residential, business garbage and recycling schedule on Monday, Dec. 23, and Dec. 30,... read more