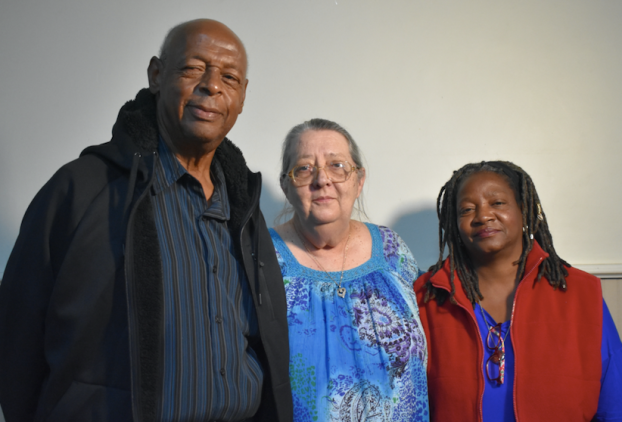 From left, John Laury, Sharon Ponton and Kathie Mosley, members of Concern for the New Generation, presented their new report on the impact of the proposed ACP compressor station on Buckingham County’s Union Hill community.

Chapter members and local residents convened Monday night at the Buckingham County Arts Building to view a presentation by Ponton of the report and its findings, participate in a Q&A session and receive copies of the report.

BREDL officials noted in their report that Dominion originally purchased two pieces of land in Buckingham County for its 57,000 horsepower compressor station necessary for moving gas through the pipeline. The first tract, a 148-acre parcel of land located in a rural area and dominated by a non-minority population, was purchased by Dominion for $225,000 after an initial value assessment of $215,700, the report states. The second piece of land, a 68-acre parcel located in the Union Hill community populated primarily by minorities and the descendants of African Americans freed from slavery, or “freedmen,” was assessed at $61,000. According to the report, Dominion paid $2.5 million for this land, which they ultimately chose as the site of their compressor station.

“Because of the shape of the Union Hill parcel, required setbacks, wetlands and the natural contours of the property, Dominion has had difficulty sitting the compressor station on the 68-acre parcel,” the report highlighted, “but insists on doing so. Despite the company and its representatives doing everything they could to divide and conquer the community, Union Hill has continuously resisted the pipeline and its compressor station for over five years.”

“It makes no sense,” Ponton said in reference to Dominion’s decision to pay such a large sum of money to place the compressor station on Union Hill. “Even for that piece of land, for it to have cost as much as it did. 68t acres for $2.5 million in Buckingham just makes no sense. It doesn’t … I just think in the end they chose the site they chose for whatever reason, thinking it might be easier for them. They wouldn’t get as much pushback, and they found out that would be completely different, because the Union Hill people have fought from the beginning. It’s now five years later, and they’re still fighting.”

Representatives from Concern for the New Generation spent the last year producing their report on Union Hill in an attempt to prove that Dominion is building their pipeline through what is described as an environmental justice community. Ponton explained that part of what is Union Hill today originally came from property owned by the Moseley family, which settled in Buckingham around 1761. Patriarch Robert Moseley purportedly purchased thousands of acres of the land, and Ponton cited that some of Moseley’s descendants, Robert, Ella, Marcia Moseley and Annie Friend Moseley Smith, sold portions of their land to freedmen and/or their descendants after the Civil War. The history of these freedmen’s presence on the land can be traced back through county records.

During the group’s study of the Union Hill site, Ponton and her companions uncovered what they believe to be multiple errors in county tax maps that outline the properties of land affected by ACP’s proposed compressor. The group walked property lines with a metal detector in search of survey markers and recorded GIS coordinates to cartographer Stephen Metts, who then verified and matched them to records researched in Buckingham County Courthouse. Of the 15 properties studied by the group, 20% were spatially incorrect.

Ponton’s team found that 11 of the 15 Union Hill properties studied were owned by minorities. She included in her presentation Monday night that it was not unusual to see deeds for African American landowners in the past to have included not only the names of the parents, but of their children as well, suggesting an attempt for those African American landowners to continue a legacy of land ownership left from parent to child.

Additionally, the group found that seven of the 15 properties studied could be categorized as heir properties. An “heir property” occurs when a property owner dies intestate, or without a will. Each individual heir of the original property owner has an equal share, or common interest, in the property. Because no one individual owner has a controlling interest in an heir property and because the number of heirs generally increases with each new generation, Ponton states in the report that these heir properties are at an extreme disadvantage when dealing with companies that want to take their land through eminent domain, such as ACP.

The team also found that five of these heir properties were owned by African American families, and that two were owned by those of Native American ancestry.

Concern for the New Generation also included in their findings a compensation chart of the price per linear foot paid by Dominion/ACP for the easements through the Union Hill study area to date. The chart included only 10 of the 15 properties studied, as five heir properties remain tied up in the court system. All properties are geographically within two miles of each other.

The report also cited that Dominion is paying an average of $6,775.40 per acre for easements through properties versus $36,765 per acre for their compressor station site. “While Dominion asserts these takings are ‘easements,’” the report states, “they severely limit the use of the ‘easement’ area in perpetuity. No trees may ever be grown on the easement again. No homes or structures of any kind may ever be built on the easements. Even operating farming equipment across these easements requires additional construction measures.”

The report continues, “Union Hill will be forever changed if forced to host a toxic, polluting compressor station in addition to a 42” high pressure fracked gas pipeline. The disproportionate impact on this majority-minority community will not only be felt in the degradation of their health, safety and welfare. Construction of the ACP will continue a historical and scurrilous policy which limits the opportunities for wealth building of the descendants of the freedmen who settled Union Hill.”

At the end of the group’s presentation Monday night, Ponton included a list of recommendations to Union Hill community members and others that fear for the future of their properties. Ponton recommended that residents make sure that they have a will, and that heir property owners consider speaking to family members about setting up a trust to protect their properties.

She added that individuals should talk to legislators about the Uniform Partition Act, and “Continue to resist the taking of private property through eminent domain for private gain. Continue to resist the subversive policy of toxic polluting industries being placed in communities of color and poverty.”

The U.S. Supreme Court agreed Oct. 4 to review a federal court ruling that previously halted ACP construction. ACP will make its case in front of the Supreme Court in early 2020 and hope to hear a final ruling by next June.

Ponton and other members of Concern for the New Generation plan on giving a copy of their report to Attorney General Mark Herring and Governor Ralph Northam. Individuals can receive a copy of the report by contacting Ponton at ponton913@msn.com.

Honoring those who served