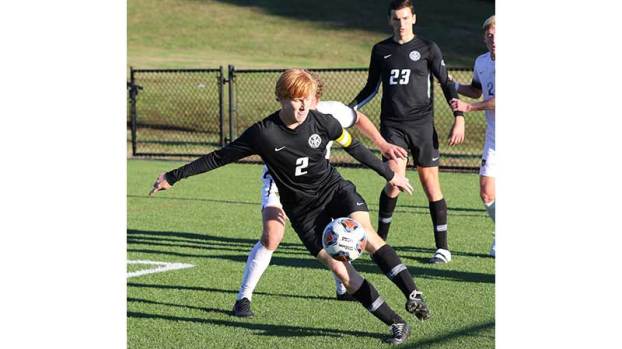 Hampden-Sydney College senior Spell Carr controls the ball against visiting Randolph College on Sunday, Nov. 3, during the Tigers’ 2-0 ODAC Tournament semifinal victory. Carr recorded an assist, and senior Jacob Mann, No. 23 in the background, scored a goal for the Tigers. (Photo by Titus Mohler / Herald)

The Hampden-Sydney College (H-SC) soccer team advanced to the 2019 Old Dominion Athletic Conference (ODAC) Tournament semifinals with a 2-0 quarterfinal shutout of visiting Randolph College on Sunday afternoon, Nov. 3, at Hellmuth-Gibson Field, a H-SC Athletics press release noted. The top-seeded Tigers (13-5-1) extended their unbeaten streak to 13 contests with the win against the No. 8-seeded WildCats (10-8-1).

Officials said in the release that H-SC looked to score early against the WildCats when senior Jacob Mann forced the Randolph keeper to make a save in the lower right corner of the goal just more than a minute into the game. The WildCats answered with a shot of their own early in the ninth minute, with senior Ian Connor making the save for the Tigers.

It was in the 15th minute that Mann had his second shot of the game; a deflection by Randolph gave the Tigers their first corner kick, the release cited. H-SC senior Spell Carr took the corner and found freshman Boyce Purdie in the box, who one-footed the ball past the keeper to give the Tigers the 1-0 lead.

At the 17-minute mark, Mann made the most of his third shot of the game off a long pass from senior Brian Tarnai, the release stated. The pass made the ball fall in front of Mann inside the goal box, and Mann left-footed the ball on the left side of the goal to extend the Tigers’ lead to 2-0.

After tallying only one save in the first half, Connor faced a flurry of shots by the WildCats after the break, officials noted in the release. In the final 25 minutes of the game, Connor made seven more saves, setting a career-high with eight total.

As the highest seed in the tournament, H-SC will host both the semifinals and championship this weekend, the release highlighted. H-SC will play No. 4 University of Lynchburg in the first ODAC Tournament semifinal game Friday, Nov. 8, at 4 p.m. No. 2 Washington and Lee University and No. 3 Roanoke College will face each other in the other semifinal at 6:30 p.m.

Buckingham County High School’s varsity football team scored on the ground, through the air and via special teams to take... read more