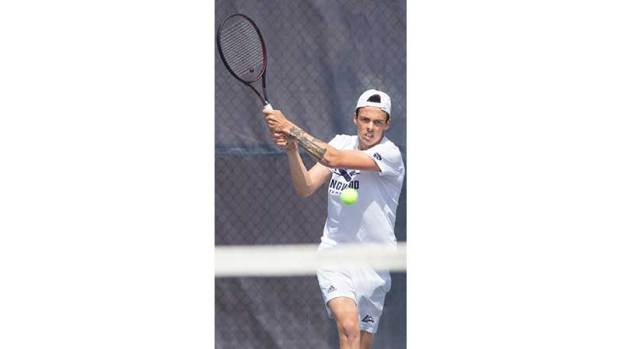 The making of an ace

It was January of 2018, and Medina Alvarez had just arrived to take over a re-energized Longwood men’s tennis team that one season prior had broken the program’s Division I record for wins. At the center of that rebuild was Blasco, a sophomore coming off a Big South Freshman of the Year campaign who, by all measures, had the makings of a transcendent talent not yet seen in a Lancer uniform.

But the Blasco that Medina Alvarez saw in that first match wasn’t the ace he had envisioned.

“I watched him lose his temper. He had an attitude. He wasn’t able to gain control,” Medina Alvarez said. “He lost to a guy who wasn’t better than him, who was actually injured. He beat Ama because Ama was all over the place.”

Yes, Medina Alvarez saw flashes of the Blasco he had been told about during the interview process, a sinewy Spaniard that wielded his racket like an extension of his own whip-like arm and hit shots that most players couldn’t dream of making.

However, all that was marred by a self-destructive pattern of emotional reactivity that ultimately tanked the talented young star’s first chance to impress his new coach and, consequently, contributed to the Lancers’ season-opening 4-3 loss to Bluefield State College.

“I remember it like it was yesterday,” Blasco recalled. “Coach knew I was good, but when he saw that, he told me I wasn’t good for the team. My emotions dictated the player I was at that moment.”

But that initial evaluation proved to be the first building block for a relationship between the two that has elevated Blasco’s game to the elite tier of the Big South and brought the Longwood men’s program along with it.

Through a steady stream of tough love and blunt criticism of his overlooked shortcomings, Blasco ultimately relented to Medina Alvarez’s brand of coaching. Now through nearly two years working alongside each other, Blasco has already set numerous school records and is in position to own them all by the end of his senior season.

Moreover, the once-rocky relationship with Medina Alvarez has evolved from mentor-mentee to something well beyond that.

“Coach Medina, he became like a father to me,” Blasco said. “He took care of me, and he changed me as a person. It’s not even really about the tennis. I focus more on changing as a person and growing up than playing tennis. Anyone can hit a ball, but at the end of the day, your emotions dictate your ability to make the ball go where you want it to go.”

Now as a senior, it’s not just the Longwood crowd that is taking notice — this year Blasco was hand-picked to represent the Big South Conference at the prestigious Intercollegiate Tennis Association Oracle Masters, a three-day tournament in Malibu, California, that is the premier fall tournament in all of college tennis.

And just as he’s grown on the court, so too has Blasco grown as a person.

“As I explained to him, the things he’s learning to do on the tennis court will become assets to his life after college,” Medina Alvarez said. “His grades have improved, his command of the team has improved, and he’s matured tremendously. He embodies what we are trying to build here, and his team completely respects him inside and outside the court.”

With Blasco leading the way with his play and his voice, the Lancers’ ceiling in 2020 is as high as that of their senior ace: Limitless.

The 2019 Hampden-Sydney College men’s soccer team has had an outstanding season, having not lost a game since Sept. 11.... read more