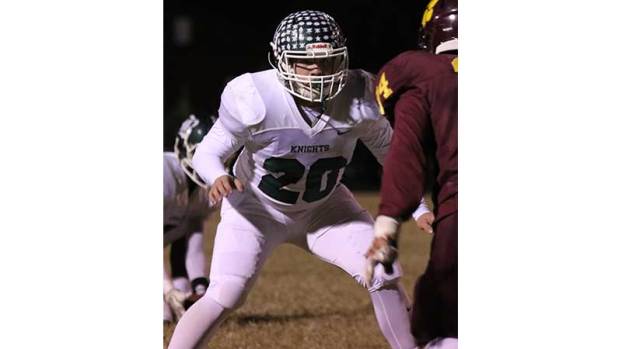 Buckingham County High School senior linebacker/running back Walter Edwards will continue to be one of his team’s most important weapons as the Knights move into 2019 postseason play. (Photo by Lyla Wood)

Buckingham County High School’s varsity football team entered this season with some important goals, and one of them was entirely specific to this week’s game — win the first-round playoff game.

“Yeah, absolutely,” Knights Head Coach Seth Wilkerson said. “Last year, we were shooting just to get into the playoffs and see what could happen. But last year, most of these guys, that was their first playoff game ever, and so this year (we’re) just hoping to … try to win Friday and continue on.”

Buckingham is tied for the best record in the state at the Virginia High School League Class 2 level. The other 9-1 team is the No. 1 team in Region 2B, Stuarts Draft High School.

However, a testament to the overall strength of the region is the fact that its No. 7 seed has a 7-3 record.

Wilkerson confirmed he has been able to study film on the Panthers, and he said, “They’re a good team, play hard on both sides of the ball and special teams. They do a lot of things right.”

As expected for a team of Page County’s caliber, it has a variety of stars.

“Offensively, they’ve got an all-district player, a running back, No. 2,” Wilkerson said, referring to senior Mikey Cash. “I think he’s already ran for 1,500 yards …”

The Panthers favor the run, but they can throw the ball too, the coach cited. Their quarterback is No. 5, senior Gregory “Trey” Knight III.

“He was all-district last year,” Wilkerson said. “He was an all-purpose player for them.”

Additionally, “they’ve got another good back, No. 33, a sophomore,” Wilkerson said, noting Blake Turpen.

The coach shared the approach he has taken this week in preparing his players for Friday night’s contest.

“I’ve just tried to let them know that playoffs (have a) different atmosphere, different intensity — it’s win or go home, so like any time in the playoffs, you’ve just got step it up a notch, just be sound on offense, defense and special teams,” he said.

Wilkerson pointed to his captains as the players he will lean on to help make sure the team has the right intensity level and is not letting nerves get in the way. Among those leaders, he highlighted senior lineman/tight end Cole Edmondston.

“I think Tae Toney does a good job getting the guys ready for the games too, being more of a vocal leader,” Wilkerson said. “We’re just going to continue doing what we’ve been doing.”

A good deal of what Buckingham has been doing lately has been featuring junior quarterback Gerry “Tae” Toney in the run game. Against Nottoway High School last week, he finished with 20 carries for 268 yards and two touchdowns.

But Wilkerson noted that this has not necessarily been part of any predetermined effort to give more carries to a specific player but is rather a practical outworking of what is proving to be effective during a game.

“We try to be as balanced with it as we can, actually, and actually, Tae’s got more carries than anybody on the team, but we try to keep it balanced, try to go with what’s working,” he said.

Last season, the Knights made it back to the playoffs for the first time since 2015, going on the road in their first-round regional game to face Glenvar High School. They lost 41-0.

But this season, their 9-1 regular season record has made their regional quarterfinal a home game, which Wilkerson said means a lot.

“It’s been I don’t know how many years now — three or four years — since we’ve hosted a playoff game, so it’s definitely something we were shooting for from the start and just looking forward to it,” he said.

If Buckingham defeats the Panthers on Friday, it will remain the home team in the regional semifinal.

Eagles end with win over Dukes