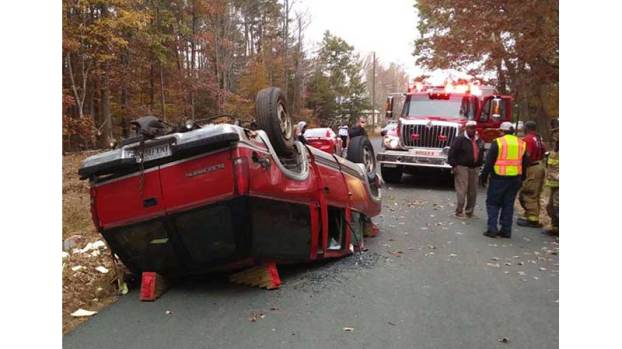 An overturned vehicle on Virso Road drew Meherrin Volunteer Fire and Rescue Inc. to the scene Friday afternoon, Nov. 15, along with Virginia State Police and Prince Edward County Sheriff’s Office. The driver was taken to Centra Southside Community Hospital and then airlifted to a trauma center due to the nature of his injuries.

A single-vehicle crash Friday afternoon, Nov. 15, in Prince Edward County involved an overturned vehicle hauling a trailer on Virso Road, with the driver eventually being transported by helicopter to a trauma center, according to Meherrin Volunteer Fire and Rescue Inc. and Virginia State Police (VSP).

“The driver, David Freeman, 52, of Meherrin, Virginia, was transported to a nearby hospital for treatment of serious injuries,” she continued. “He was not wearing a seat belt.”

Meherrin Fire and Rescue Captain J.R. Newman said, “When we first got the initial call, it was a vehicle rollover on Virso Road with possible entrapment — unknown how many occupants, unknown what kind of injuries that (they) did have. Squad 5 was the first on scene, which is when I took command, and we noticed that there was a patient still inside the vehicle. It was a (confirmed) rollover.

“That’s when our (emergency medical technician) EMT and I and multiple other firefighters try to assess what’s going on, what kind of injuries he has,” he continued, “and once we went through and figured out that we need to hurry up and get him to the hospital, that’s when we made the initial call to land a helicopter to send him to a trauma center due to his injuries.”

Newman, who accompanied the driver in the ambulance to Central Southside Community Hospital, was not sure which hospital the driver was flown to, but he said, “It was Med Flight 1 that landed, so more than likely, they went to VCU (Virginia Commonwealth University Medical Center).”

Newman said extrication of the driver from the vehicle “took us probably about 5-10 minutes.”

The captain confirmed that the driver was the only person in the vehicle.

Newman said Meherrin Fire and Rescue was notified of the wreck at 2:30 p.m. and arrived about 10 minutes later at the scene, which was 1263 Virso Road.

Geller concluded her Nov. 20 statement by noting, “Charges are pending, as the crash remains under investigation.”