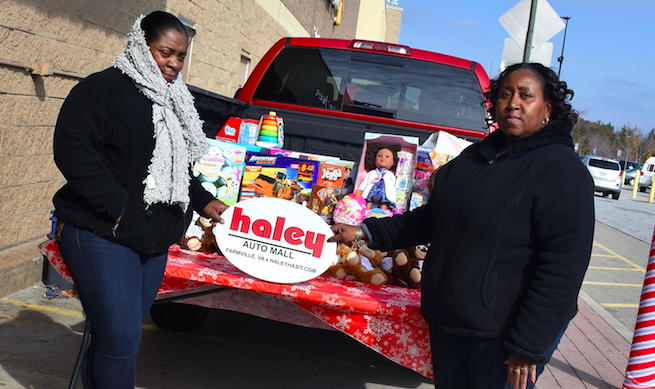 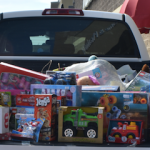 Area residents showed support for PECM and stuffed the truck on Saturday. 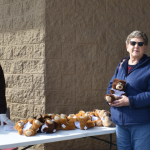 Prince Edward Christmas Mother (PECM) Board members and volunteers braved the unusually cold weather Saturday morning, Nov. 16, to set up in front of Walmart in Farmville for its annual Stuff the Truck event in support of area children and families in need.

In the Christmas spirit bright and shiny new trucks, generously provided by Haley Auto Mall of Farmville for the event, were parked by the store entrances. Decked out in warm coats, hats, scarves and mittens joyful volunteers and board members prepared to Stuff the Truck and collect toys and donations.

Tables were set up with cute and cuddly teddy bears sporting a sweater with “A Farmville Christmas 2019” logo. Proceeds from the bear sales also go to support the PECM mission, which according to its website, is “to serve children under 18 years old and 18-year old children still in high school or completing a high school curriculum through providing clothing, toys, books and other gift items during the winter holiday season.”

As previously reported in The Herald throughout the year, the organization hosts various fundraising events and toy drives in order to provide monetary funds and items needed to provide Christmas for hundreds of local children. Last year, PECM provided toys and other items for 317 children in the county.

The organization works directly with Prince Edward County Social Services, the public schools, and local churches and other nonprofit organizations to identify those in need to ensure they have access to the program that the organization provides.

According to PECM Vice President Kate Pickett Eggleston the Stuff the Truck event was a big success and the organization collected lots of toys and donations. She went on to say, “We spend about $100 on each child. Each child receives a stocking stuffer, hat and gloves, coloring book and crayons, a book, a DVD, a board game, a $15 toy and a $30 toy. Currently, we have over 450 toys (those are $15 and $30 combined).” Eggleston noted that monetary donations would be most helpful at this time so they can purchase toys to fill in the gaps. “For some age groups we need more books, for some we have enough books but need more $15 toys, etc.,” Eggleston stated.

Organizers also noted that volunteers are needed to help with set up on Dec. 2-3 and on distribution day on Dec. 4. “We set the sports arena (Firemen’s Sports Arena on Zion Hill Road) up like a shopping experience for the parents and they choose the items for their children. Each parent gets a personal shopper (volunteer) to help them. We also give each parent a roll of wrapping paper, bows and tape. We could use donations of the paper, bows, and tape as well.”

The 2019 commemorative annual teddy bears will be for sale at the tree lighting in downtown Farmville on Friday. The bears are $10 each. Monetary donations will also be accepted.

Get Schooled: Turkey trot and tales