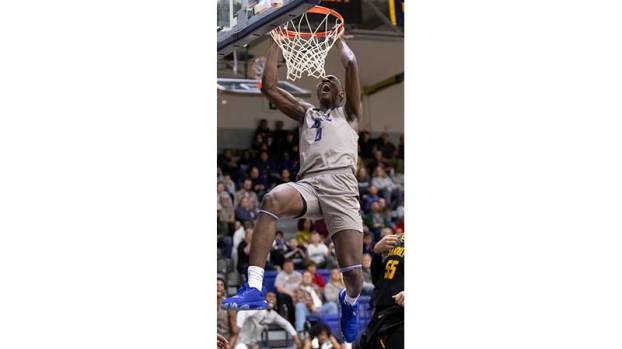 Longwood University freshman forward Leslie Nkereuwem tied for the team-high point total Friday, Nov. 15, with 13 points, helping the Lancers carry a 4-1 record into their Monday, Nov. 18, showdown at North Illinois University. After that contest, Longwood has more than a week off before visiting University of California, Riverside on Tuesday, Nov. 26, at a time to be determined. (Photo by Mike Kropf / Longwood University)

Four days, three wins, and Longwood University men’s basketball is once again off to one of the best starts of its Division I era, a Longwood Athletics press release noted.

Now 4-1 for the second straight season under Head Coach Griff Aldrich, the red-hot Lancers capped a gauntlet of a homestand with their third straight win in Willett Hall on Friday night, Nov. 15, 78-53 over NCA Division III program Randolph College, officials cited in the release. The win improved the Lancers to 4-0 on their home court and made them only the ninth team in program history to win four of their first five games, joining last year’s squad on that list.

The release stated that in its most compact stretch of the regular season, Longwood went 3-0 in a 96-hour span and showcased the program’s newfound depth that has been bolstered by an eight-man signing class. Several of those newcomers stepped up Friday night against the Wildcats (1-2), including freshman forward Leslie Nkereuwem who broke out for 13 points to match fellow newcomer Christian Wilson for the team scoring lead.

Nkereuwem finished 4-of-5 from the field with a pair of dunks and added five rebounds, three of which were on the offensive glass. Meanwhile, Wilson grabbed seven rebounds of his own and led Longwood in scoring for the third time in his first five games as a Lancer, the release highlighted.

Their contributions gave the Lancers another win just one day after dispatching St. Francis College, of Brooklyn, 86-77 Thursday night, Nov. 14, in Willett Hall and three days after a runaway 85-55 win over University of Maryland Eastern Shore on Tuesday, Nov. 12, the release cited.

“It’s tough, but it’s asked of us, and it’s expected of us,” Longwood senior guard Sean Flood said in the release.