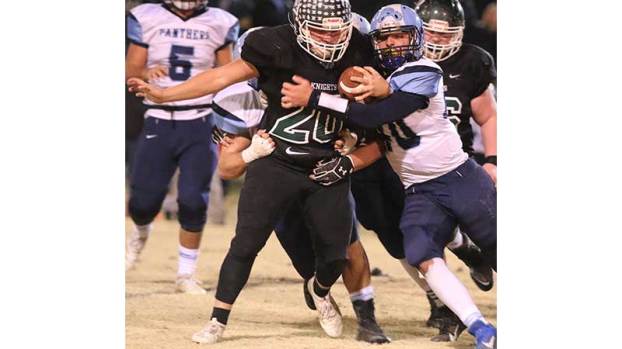 Buckingham County High School senior running back Walter Edwards will help the Knights learn how good they can be as they wade deeper into postseason waters. (Photo by Roger Spivey)

Buckingham County High School’s current varsity football players did something they had never done before last week by achieving a playoff win, and now they prepare for their first-ever regional semifinal.

To reach this point, the East Rockingham Eagles routed host No. 3 Clarke County High School 41-7 last week in the regional quarterfinals. This was striking because on Sept. 27 during the regular season, the score was essentially reversed, with the Clarke County Eagles winning 42-7.

“Clarke, about halfway through the season, they lost their main back in the backfield,” Buckingham Head Coach Seth Wilkerson said of the squad that finished the year 8-3.

This helped explain the huge turnaround, but it also underscored another reality.

“East Rock(ingham) lost a couple games, but they were to quality teams,” Wilkerson said.

Studying game film on the East Rockingham Eagles made some things clear.

“They want to try to run the ball,” Wilkerson said. “They’ve got No. 5. I believe he was all-district for them last year, and from what I hear, he’s committed to (James Madison University). I believe that’s right. He plays tailback for them, and he’s also (an) all-state linebacker for them.”

“They’ve got an all-district receiver, No. 2,” Wilkerson said, referring to senior Jaeden Rouse.

Though the Eagles favor the run, they throw it some, and playing at quarterback is 6-foot-3-inch senior Tyce McNair, He is sometimes called on to run the ball as well.

“He doesn’t have as many carries as the running back, but he will keep it some and just does a good job on play action and trying to get outside where he can either throw it or run,” Wilkerson said.

When asked if the Eagles were comparable to anybody Buckingham had faced earlier this season or if they presented a new look, Wilkerson said, “A little bit of a different look, but basically, we know they’re going to try to run the ball first, and they do keep it fairly balanced, but with that No. 5 in the backfield, they want to get him going, and we’ve got to focus on stopping him.”

Standing out on defense for East Rockingham is No. 24, senior Colton Dean, who plays linebacker, Wilkerson said.

“And he was all-district last year,” Wilkerson added. “And they’ve got an all-district defensive end, No. 23, (junior Matthew) Fries.”

Wilkerson has been on the coaching staff for a Buckingham team that advanced as far as the state title game, and he has aimed to prepare his players for the next step in their postseason journey this week.

“None of them have made it past the first round, and (I) just let them know, each game from here on out gets more and more challenging, and (they’ve) just got to be mentally ready as much as physically,” he said.

Because of the strength of their regular season performance, the Knights, who were reported to be healthy as of Wednesday, will once again enjoy the benefit of playing on their home field in front of the Buckingham home crowd.

“That just helps us out,” Wilkerson said. “Just being at home is always a plus for us, and I know we’re just looking forward to Friday night.”