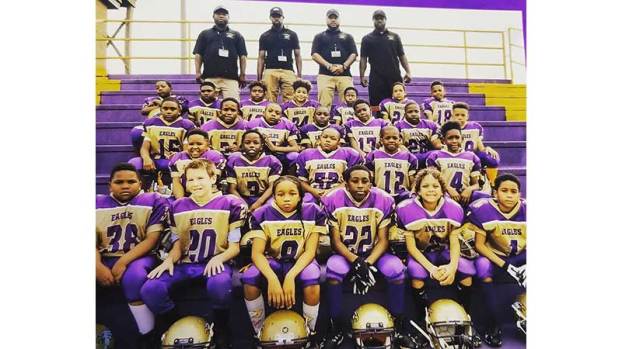 ‘How dedicated they were’

The Prince Edward Eagles Minor Division youth football team made history this year by orchestrating a perfect 12-0 season, punctuated at the end by a 26-0 victory over the Nottoway Gators in the James River Southside Youth Sports Association 2019 Super Bowl for the Minor Division.

Farmville Director of Recreation Chris Bolt confirmed it was the first time a Prince Edward Minor Division football squad had won the Super Bowl in more than a decade.

“It was an outstanding victory,” Eagles Head Coach Melvin Mitchell said. “It was well-deserved by that team. Out of my six years of coaching, that’s been one of the best groups I’ve had. Not to downgrade the other teams that I’ve had, but this group here, they’re something special.”

He said that on the first day of conditioning in July, he asked them what they wanted out of the season, “and they told me they wanted to win the Super Bowl. And I explained to them, ‘It’s going to be a lot of hard work, dedication and sweat and tears,’ and they came out and gave me all of it.”

Mitchell noted that his players were self-motivated, and he shared a specific testament to the level of devotion to each other and the game that they possessed.

“They were dedicated to the point to where when the fair came into town, I told them, ‘Hey, I’m going to cancel practice,'” he said. “‘Y’all go to the fair, have some fun.’ I said, ‘But I will be here for anyone who wants to be here. …’”

Nearly the entire team chose practice over going to the fair.

“That’s how dedicated they were,” Mitchell said.

During the course of their undefeated run, the Eagles recorded no less than eight shutout victories.