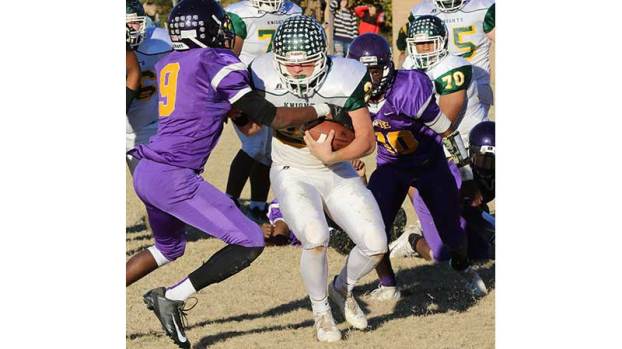 Coach’s game notes: The Eagles and Knights enter this game with a special connection beyond just being nearby rivals. Prince Edward Head Coach Larry White coached the Buckingham junior varsity football team last year and was with the Buckingham football program until the summer of this year when he was hired to lead the Eagles.

White provided insight into what has taken the Knights to another level this year in their second season under Head Coach Seth Wilkerson. They made their return to the playoffs in 2018 after a two-year absence and lost in the first round. That taste of the postseason set the tone for the returning Knights players, who wanted to get in the weight room in December, but Wilkerson told them to start in January. The players bought into what Wilkerson is trying to do.

Fast forward to the state of the Knights in late October, and the task before the Eagles is a daunting one. The Knights are good and tough, and the Eagles cannot afford to make any mistakes against them.

Wilkerson will come at you with his double wing attack and then hit you with the H-back offense.

The Eagles, which are healthy, are not going to lie down to the elite Knights and will put up a fight.

The Knights also enter this game healthy, and Wilkerson communicated strong respect for White, having known him for a long time. White is a great person and coach, and he really helped get the junior varsity players at Buckingham on the right track, a work he is continuing with his varsity players at Prince Edward.

On defense, Prince Edward has some quickness up front, some of it stemming from junior nose tackle Davon Manson.

Coach’s game notes: The Raiders appear on film to be the third-best team the Dukes have faced this year, behind only Buckingham and Goochland. Amelia appears solid on every level, demonstrating no weaknesses.

On offense, the Raiders can be run-heavy or pass-heavy based on the game plan, as they ran almost every time against Bluestone and threw the ball a lot against Buckingham.

Passing the ball for Amelia is sophomore quarterback Antonio Harris.

Raider standouts on defense include senior linemen Seth Hawkins and Maxwell Perry. Each of those players is 6 feet, 3 inches tall and weighs at least 270 pounds.

Coach’s game notes: This is a must-win game for the Falcons, who are looking to maintain their No. 1 ranking in Division III of the Virginia Independent Schools Athletic Association. Keeping that top position would give them home field advantage throughout the state playoffs. A loss Saturday could help drop Fuqua to No. 2 or 3.

Due to injury, the Falcons will be without senior lineman Hunter Gibson and likely without junior running back Jackson Allen.