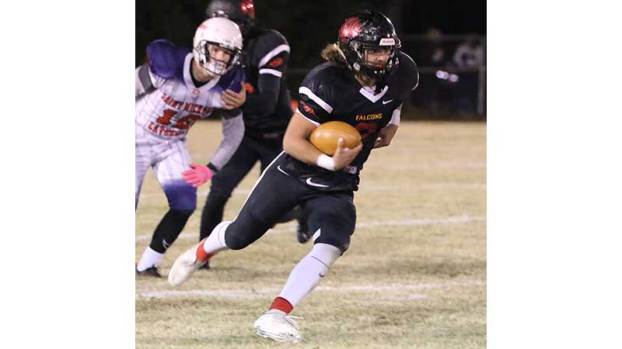 Among the key players graduating from this Falcons squad is senior quarterback Elijah Warner, pictured above competing in his final game on the gridiron as a Fuqua Falcon. (Photo by Titus Mohler / Herald)

The Warriors (9-1) received their one loss courtesy of Fuqua during the regular season, 43-41, but there were few key things different about them this time.

“The first game we played against them they had a couple guys banged up, and just that depth at our level, the depth is just major,” Falcons Head Coach Ben Manis said. “We had a bunch of kids in our game that were kind of playing through injuries, so they gave it all we got. We made some good adjustments at halftime and just didn’t quite execute, so I think the difference is we didn’t execute and they had good explosive plays off of busted plays.”

The coach said St. Michael the Archangel’s players back in their lineup included two linemen and three skill players.

“And all of them looked like they started,” he said. “I’ll have to go back to the film and see, but again, the kids played their butts off, both teams.”

He praised the play of Warriors senior Jalen Smith.

“It’s hard when you’re playing against the Fredericksburg Area Player of the Year two or three years ago — that kid’s hard to contain, and he made some great plays,” Manis said.

St. Michael the Archangel also enjoyed an advantage up front.

“Just the overall size, the beef that they had on the offensive line, golly, they probably outweighed us by 40 to 60 pounds all the way across the board,” Manis said. “So when you get into a game and they can start grinding it out, they can grind it out.”

Despite the loss, Fuqua finished the season with an outstanding 9-2 overall record.

Buckingham County High School’s varsity football team entered this season with some important goals, and one of them was entirely... read more