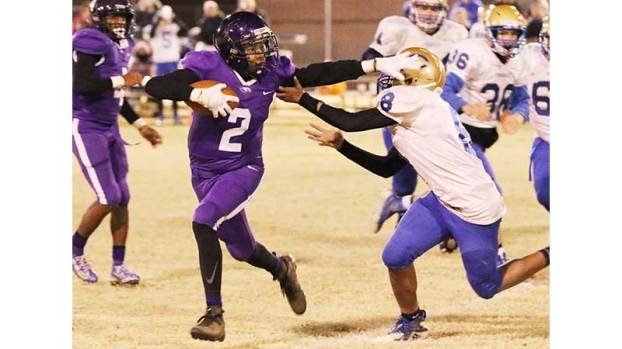 Eagles end with win over Dukes

Prince Edward County High School’s varsity football team ended its 2019 season on a bright note with a definitive 50-0 victory over visiting Cumberland County High School on Friday, Nov. 8, while the Dukes managed to establish some key building blocks for the future.

Eagles Head Coach Larry White said, “The kids played well, played good, and we take this win and this is something positive that we can take into next year. We have six seniors, and we’ve got about 20-some returning, and then plus what the JV (junior varsity) had on there that we’re bringing up. I was pleased about the season finale, and we’re looking forward to next year. We’re going to get in the weight room.”

On Friday, Prince Edward sophomore Nate Reed finished with nine carries for 122 yards and one touchdown, and he also went 2-for-3 passing for 50 yards and a score.

Eagles junior Saybien Peterson had 11 carries for 151 yards and two touchdowns, freshman Jeris Smith had three carries for 48 yards and a score, and junior De’Murie Banks had a 50-yard touchdown catch.

Prince Edward finished with a 3-7 record for the season and was not eligible for the Region 2A playoffs.

For the Dukes, it was the third straight winless season, as they went 0-10. To qualify for the playoffs this year in the small Region 1B, they needed to win Friday’s game.

Injuries plagued Cumberland against the Eagles.

“DaJuan Brown wasn’t able to play, so that left us with one running back, and then Kyler Gilliam got hurt sometime in the first half, so that left us, basically, with no running backs,” Dukes Head Coach Howard Paras said. “So we ended up with Thomas Trowbridge finishing the game out for us at tailback. … We hadn’t even practiced that, but we got put in a tough spot, so he stepped up, and I thought he did a really good job.”

Sophomore Brandon Diming finished as the Dukes’ top rusher with 12 carries for 28 yards.

Paras saw three key positives from the 2019 campaign for Cumberland.

He said he thought all three of those goals were met.

“I’ve seen too many coaches come into this program and sell out to try to win a game or two in year one, so my goal was to build for next year and the year after, and if we could have picked up a couple wins along the way, that (would have been) great, but winning at all costs this year was not the goal,” he said.

A solid ending to a turnaround season

Fuqua School’s varsity girls volleyball team did not advance beyond its conference tournament for the 2019 season, but the Lady... read more