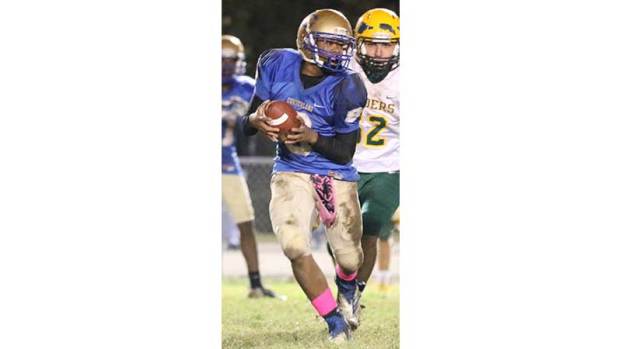 Dukes fall to Raiders but see youthful potential for the future

Cumberland County High School’s varsity football team started its game Friday, Nov. 1, a bit sluggishly, and then the Dukes came out in the second half showing increased intensity that they can build on for the future, but the Raiders prevailed on the night, 49-0.

“I feel like the guys played well in the third and fourth quarter,” Cumberland Head Coach Howard Paras said. Dukes senior quarterback Jordan Newman was sidelined by injury two days before the game, pushing sophomore running back Brandon Diming, pictured above, into that role.

Of Diming, Paras said he “stepped in and played quarterback the whole night — I thought he did a good job.”

He had 14 carries for 61 yards and went 7-for-16 passing for 46 yards. Sophomore running back Kyler Gilliam had six carries for 27 yards.