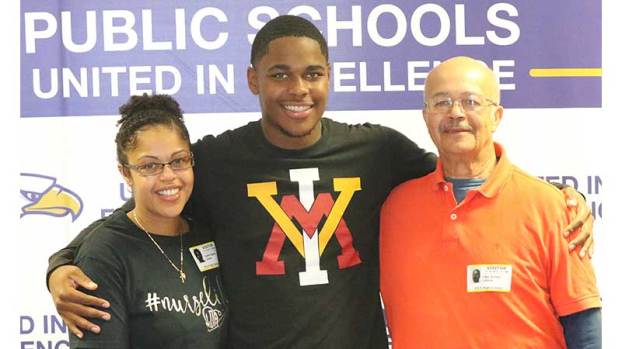 Prince Edward County High School senior baseball standout Isaih Dailey, center, is joined by his mother, Leslie A. Dailey, left, and his grandfather, Otis Dailey, at the signing ceremony where he formally announced his decision to attend and play baseball for Virginia Military Institute (VMI). (Photo by Titus Mohler / Herald)

Dailey signs to play for VMI

His mother, Leslie A. Dailey, expressed excitement for her son and satisfaction in his achievement.

“He’s very deserving of this,” she said. “He really is. Isaih has worked extremely hard to get to where he is right now, and I don’t think anyone is more deserving of it than he is. And as a parent, what more can you really ask for?”

Isaih Dailey’s grandfather, Otis Dailey, who was also present at the signing, said, “Isaih’s been passionate about playing ball since he was a little boy.”

When he was little, Isaih Dailey played Dixie Youth Baseball.

“That’s where it started,” his mother said. “He started in Charlotte County for one year, and then we moved to Prince Edward County.”

She noted that he has since played for several travel ball teams, “but (Richmond Indoor Sports Experience) RISE has been, really, the major one.”

Given the level to which Isaih Dailey had developed his skills, he had multiple options to consider when it came to playing college ball.

“I had a couple of schools looking at me, like (James Madison University) JMU and Longwood (University), and Coach (Jeff) Kinne from Hampden-Sydney (College), he was my (travel ball) coach, so he’s seen a lot of me, and he really wanted me too,” he said.

As for what made him choose the Keydets, Dailey said, “They were the first ones that really showed that they were really interested in me, and they really wanted me to be a part of their program, and the possibilities after graduation, it’s just a lot of possibilities for me, and I need that, because it’s a good education and a good degree.”

He said he expects to major in computer science.

VMI coaches have given him hints at how they plan to use him on the diamond.

“I know I’ll probably be a corner or middle outfielder and middle-of-the-lineup kind of batter, but other than that, that’s all I know,” he said.