Celebrating the secrets of Thanksgiving

Psalm 107 By the time of this reading people all over the nation will be coming down the home stretch of preparing to pause for the special day of Thanksgiving. Thanksgiving Day is born out of religious thought but placed and unfolded in a secular context. This special day is traditionally celebrated by enjoying a scrumptious meal with family and friends consisting of turkey with all the trimmings, greens, pumpkin pie and other assortment of foods and desserts. The foregoing, however, is really the byproduct of the essence of the meaning of Thanksgiving in that the real meaning is pausing to give thanks unto almighty God for his goodness and mercies from one season to another.

The Psalmist in psalm 107 invites us to walk with him and enjoy some well-kept secrets of Thanksgiving. Usually, we are accustomed to hearing about the secrets of what’s in the pumpkin pie or the special recipe for the potatoes au gratin. But here the psalmist is bubbling over to have us take a journey whereby we can find ourselves on our journey from last season to this season and discover that we have much in common with others from the old dispensation to really thank almighty God for during this season and everyday of our lives.

The psalms provide the undergirding and pattern of earnest joyful prayer. Dietrich Bonhoeffer, who spent many years in a Nazi prison camp says, “We cannot pray unless we come to the psalms because the heart cannot pray by itself.” He states, “if the heart prays by itself it confuses wishes, hopes, laments, rejoicing and even heaven and earth.” He says, “the heart must be given something to define its petition. It is not just to be poured out to God, but rather to find your way to God and ultimately God becomes the central focus.” That is so vitally important. Thus, the psalms are full of range of motion and offers to God in prayer. Make God the central focus this Thanksgiving. And this psalm is a joyous Thanksgiving to God. The secrets are that we have all been along these paths described by the psalmist. Hear him now.

The psalmist declares in verse six, “He delivered them from their distresses.” In verse 9, “He satisfied the longing soul and fills the longing soul with goodness.” Verse 14, “He brought them out of darkness and the shadow of death …” Verse 20, “He healed the sick and delivered this people from destruction.” Verse 29, “He calms the storms so that the waves are still.”

Thus, in our quest to be a thankful people to a God who is good; and when God has answered your prayers continually, one must be willing to tell God, “thank you” with great joy. 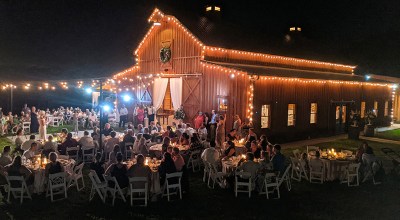 The Barn at Gully Tavern: Tying the knot in the Heart of Virginia