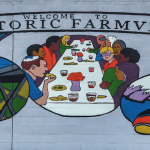 The Farmville-Interfaith Collective Mural adorns the back of the Farmville Wholesale Electric building along High Bridge Trail in downtown Farmville. 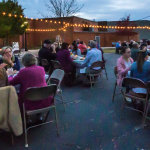 A farm-to-table dinner followed the unveiling and dedication of the mural.

That’s what Michael Cheuk said to his wife Beth as they toured familiar neighborhoods in Farmville last Saturday: “We could live here.” The former pastor at Farmville Baptist was impressed by the growth, the comfort, and the joy they were seeing throughout the community.

Now a leader of the Charlottesville Clergy Collective, an interfaith organization, Cheuk came to address a group of local residents as they celebrated the completion of a “Welcome to Farmville-Interfaith Collective Mural” on High Bridge Trail.

While the Rev. Dr. Michael Cheuk remarked on changes in the town where he and his family lived from to 2005-2012, he also told his listeners how he himself had changed after he accepted the call from the University Baptist Church. Responding to the tragic church shooting in Charleston, South Carolina on June 17, 2015, Cheuk began working with ministers of other religious organizations to be ready should a similar event occur in Charlottesville. The result was a new organization, the Charlottesville Clergy Collective (CCC).

Tragically, the CCC was needed after the violence of the Unite the Right demonstration in the summer of 2017 and the KKK’s more aggressive posture in the area. The group of ministers from different faith traditions, which had perhaps 25 members when it was founded, grew to 80 and began meeting regularly to explore the causes of and seek solutions to facial antagonisms.

The Farmville Interfaith Collective, founded by Patsy Watson, has similar goals, as represented in the mural on the back of the Farmville Wholesale Electric building. The painting, designed by James Early of James Early Art and Design and executed at the direction of Cricket Edmundson (retired art teacher at Prince Edward County Elementary School), is made up of interconnected images representing elements in community history — the Moton Museum, Longwood University, the railroad, the battle of Sailor’s Creek, Hampden-Sydney College, Prince Edward and Fuqua Schools.

The Rev. Cheuk explained that one of the CCC’s key realization after 2017 has been that the anger and frustration that led to violence in Charlottesville did not come solely from outside the community but was also within it. “Peace is more than the absence of conflict,” Cheuk told his listeners, members and friends of the Farmville Interfaith Collective. “We are not safe until the most vulnerable among us is safe.”

Through study groups, workshops, and dialogue the CCC has promoted self-examination and ways to bridge gaps in our social structure. Patsy Watson explained that the Farmville Interfaith Collective hosted this fourth open-invitation dinner Saturday at the High Bridge Trail Plaza to encourage local citizens to seek “wholeness” in individuals and in the community.

A number of those present had made special efforts to commemorate the event. Adam Paulek, Associate Professor of Art at Longwood University, designed and made distinctive dinner plates that participants could take home with them. His graduate interns are Holly Strohl and Cole Worden.

“We love having the mural on our back wall,” said Gordon Smith. He and Stan Smith offered the space on the Farmville Electric building for the painting. Funds were provided by the Downtown Partnership and individual contributors. High Bridge State Park ranger Daniel Jordan wholeheartedly endorsed the project. Sherwin Williams and Lowe’s also contributed.

The farm-to-table event brought food grown and harvested close to Farmville for a dinner following the unveiling and dedication of the Interfaith Collective Mural. The roughly 90 participants bought food items that celebrate their faith, ethnicity, and holiday traditions.

Would the Cheuks really consider living here again? Those who applauded his remarks Saturday night sincerely hope so.