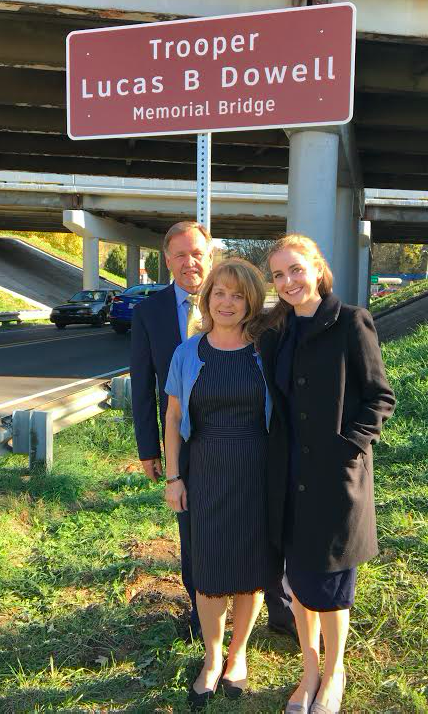 From left, Mike and Rebecca Dowell stand with their daughter, Erica Dowell, at the unveiling of the bridge dedicated in memory of their son and fallen VSP Trooper Lucas B. Dowell.

The Interstate 81 bridge over Whitetop Road in the Town of Chilhowie has been dedicated to fallen Virginia State Police (VSP) Trooper and Smyth County native Lucas B. Dowell.

Dowell, a member of the VSP Tactical Team and graduate of the VSP’s 122nd Basic Session in November 2014, was killed while assisting the Piedmont Regional Drug and Gang Task Force with executing a search warrant at a Cumberland County home.

The Tactical Team made entry into the home shortly before 10 p.m. on Feb. 4 when a male subject inside the residence, 44-year-old Corey Johnson, opened fire on the group. Tactical Team members returned fire, fatally wounding Johnson.

Dowell was transported to Centra Southside Community Hospital in Farmville, where he later succumbed to his injuries.

According to a release from VSP Public Relations Director Corrinne Geller, Virginia legislators, Smyth County and Town of Chilhowie officials, state and local law enforcement, transportation officials, family and friends of Dowell gathered on the afternoon of Friday, Nov. 1, to ceremoniously dedicate the bridge as the “Trooper Lucas B. Dowell Bridge.”

Dowell earned a degree in Criminal Justice from Radford University, the release cited. As a trooper, he was first assigned to the VSP Appomattox Division’s Area 18 Office, which encompasses Charlottesville and the counties of Albemarle, Fluvanna, Greene and Nelson. According to the release, Dowell was later transferred to Area 20, which is also in the Appomattox Division and encompasses Lynchburg and the counties of Campbell and Amherst. Dowell was also a member of the Appomattox Division Tactical Team, described by Geller as the equivalent of a SWAT Team.

On Aug. 2, the Town of Amherst named their South Main Street/Route 29 Business bridge after Dowell.

Jeff Norris Many in the scouting community are aware that Hampden-Sydney College (H-SC) has long offered a scholarship for Eagle... read more