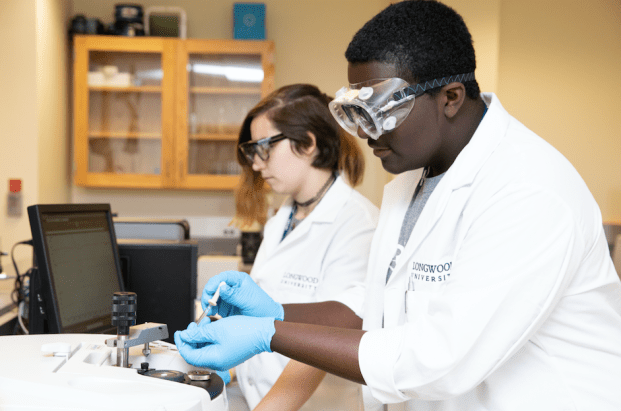 Four area high schoolers did not have plans to go home after school Thursday, Nov. 21, a Longwood University press release cited, hinting at a special opportunity that awaited them.

Instead, they were set to head to Longwood’s Fall Showcase for Research and Creative Inquiry where they would present their own research alongside hundreds of college students, the release noted.

Officials said in the release that the high school students’ participation in the showcase was the result of an innovative new research program called Longwood Summer Scholars: Exploring Science, launched this summer by Dr. Sarah Porter, Longwood associate professor of chemistry and co-coordinator of the spring and fall research showcases. The program gave the young students a taste of intense, college-level work over eight weeks this summer as they collaborated with top Longwood students and professors in the PRISM program.

PRISM stands for Perspectives on Research In Science & Mathematics.

“It was a better summer than I could have dreamed of,” Prince Edward County High School senior Antonio Harvey said in the release. “I always sort of liked science, but I never imagined spending all day doing this. It’s making me think differently about what I want to do with my life and going to college.”

On Nov. 21, the four high school students were scheduled to present their research posters at the showcase from 4:25-5:05 p.m. in the Upchurch University Center Soza Ballroom, the release stated. There, amid other college-level research posters, they would answer questions from professors and other members of the community interested in their work.

The release cited that the showcase was set to feature research projects from a variety of disciplines across campus.

The Virginia Business Higher Education Council, a nonprofit organization that advocates for higher education across the commonwealth, promoted the fall showcase through its Growth4VA campaign, a multiyear effort to highlight innovative educational opportunities for greater access and affordable pathways across Virginia’s higher education institutions, officials noted in the release. Representatives from Growth4VA were set to be on hand at the showcase to highlight student research through social media and other channels.

By partnering with the American Chemical Society and Army Educational Outreach Program, Porter launched the summer research program to target high schoolers from historically underrepresented populations in the STEM (science, technology, engineering and mathematics) fields, the release highlighted. Students from across South Central Virginia were invited to apply, and four budding scientists were chosen.

Abriel Johnson and Harvey, from Prince Edward County High School, and Tanea Doswell and Katelynn McCrillis, from Randolph-Henry High School in Charlotte County, spent hours in the lab pouring over notes and running experiments alongside Longwood professors and students in the PRISM program, the release stated. Lab work is notoriously long and quiet, but moments of breakthrough were instantly memorable. Doswell worked with Dr. Benjamin Topham, Longwood assistant professor of chemistry, on creating components for electrical circuits at the molecular level.

“My favorite moment was testing a molecule we had designed, and the results were amazing,” she said in the release. “We had been building these molecules on the computer and running simulations, testing how current flowed through them. We had a little success, but we added some benzene rings to the ends of one molecule, and the results were through the roof. It was an incredible feeling, seeing that result come through.”

The release noted that it was a big leap in both expectations and scientific understanding that the four high schoolers were asked to make, but all of them rose to the challenge, building the kind of mentoring relationships with students and professors that are a signature Longwood experience.

“It was tough at first,” said Johnson, who worked with Dr. Jonathan White, Longwood assistant professor of chemistry. “We had to get up to speed really quickly, but once we learned the processes and some of the technology in the lab, it started to make sense. I really liked learning this stuff and felt like we really accomplished something by the end.”