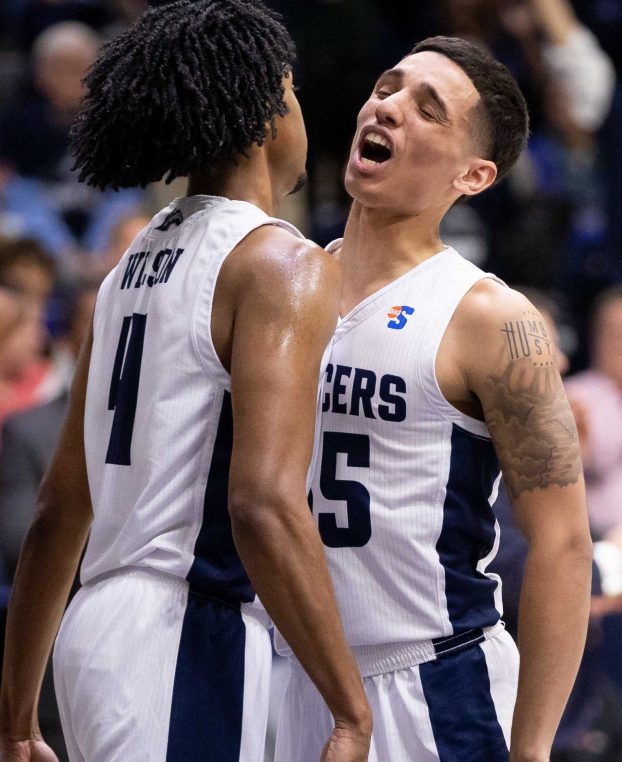 Longwood University fans eager to get their first look at the 2019-20 version of the Lancer men’s basketball team need wait just one more month for a sneak peek, a Longwood Athletics press release highlighted. Officials noted in the release that heading into year two under Head Coach Griff Aldrich, the Lancers will hosts fans for a two-part preseason event Oct. 11-12, beginning with Friday, Oct. 11’s Men’s Basketball Tipoff Celebration Dinner at the Longwood Alumni House at 5:30 p.m. and followed by the annual Blue-White Scrimmage in Willett Hall on Saturday, Oct. 12, at 10:30 a.m.

Tickets for Friday night’s dinner are available for purchase at go.longwood.edu/ tipoff, while the Blue-White Scrimmage will be open to the public free of charge, the release cited. For more information about those events or questions about registration, contact Longwood Director of Men’s Basket– ball Program Development and Recruiting Luke Ford at fordsl@longwood.edu.

The release stated that the tipoff celebration dinner will offer attendees the opportunity to meet, greet and socialize with members of the team and coaching staff at the former Longwood Bed & Breakfast in Farmville. Tickets to that event include hors d’oeuvres and an open bar with beer and wine from 5:30-8 p.m.

The following morning, the Lancers will gear up and take the court for a public intrasquad scrimmage on Jerome Kersey Court, officials said in the release. That event will offer fans their first look at Longwood’s new-look squad, which includes a talented crop of eight newcomers in addition to a core of experienced veterans, including the four-man senior class of Sean Flood, Shabooty Phillips, JaShaun Smith and Jaylon Wilson.

Last year the Lancers enjoyed a breakout season under Aldrich, reaching the postseason for the first time in the university’s NCAA Division I era with a bid to the 2019 Roman College Basketball Invitational, the release highlighted. Longwood upset Conference USA powerhouse the University of Southern Mississippi in the opening round of that tournament in Willett Hall to punctuate a season that also included the second-most wins of Longwood’s Division I era and a 10-5 record at home in Willett Hall.

Officials stated in the release that Longwood will tip off the 2019-20 season Nov. 5 in Willett Hall when Marymount University makes the trip to Farmville for the season opener. That will be the first of four home games in November and 14 total outings in Willett Hall.

The release concluded by noting that season tickets for the 2019-20 season are now available at www.LongwoodTickets.com.