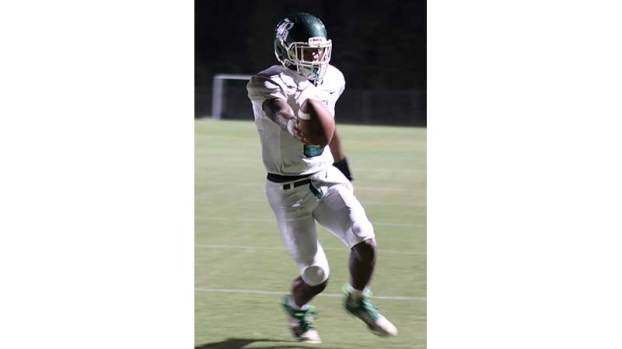 Buckingham County High School junior quarterback Gerry Toney, pictured from a previous game, ran for a score and passed for one, too, Friday night during the Knights' 36-6 victory over host Cumberland County High School. (Photo by Lyla Wood)

Buckingham County High School’s varsity football team struck early on long-range scores and then gave some younger players opportunities to play Friday night against host Cumberland County High School, which showed some notable fight even as the Knights were able to win 36-6 in the Battle of Route 60.

“(They) played well on both sides of the ball,” Buckingham Head Coach Seth Wilkerson said of his players. “Cumberland, they’re young, they’ve got a young team, and I just thought we came out and executed.”

He said he started taking his starters out of the game about halfway through the second quarter, offering some good playing time to the second team and junior varsity players.

“The more experience they get, the better that’ll make us down the road and just help us out overall,” Wilkerson said.

Leading the Knights in rushing was junior fullback Xavian Gough, with two carries for 95 yards and two touchdowns.

“Because of some injuries, we’ve moved him to fullback and he’s doing a good job there,” Wilkerson said of Gough. “On defense, he started out as a corner, and he’s kind of moved to linebacker, and we can play him just about anywhere on the field, so it’s definitely an advantage for us to have somebody like that.”

Cumberland Head Coach Howard Paras said he did not feel too bad about his team’s performance overall.

“We were clearly outmatched, talent-wise, but our guys fought hard the whole night,” he said. “They never gave up.”

He noted that his team was able to move the ball a little better than normal.

“We still only scored once, but we were pretty productive on offense,” he said.

The Dukes produced an approximately 92-yard scoring drive that was capped by a short touchdown run from sophomore running back Nasir McDonald.

“Kyler Gilliam had a really good night,” Paras said. “He led us in rushing.”

“Defensively, we got better as the game went on,” Paras said. “Second, third and fourth quarter we played pretty well on defense.”

Cumberland (0-7) has a bye this week, while Buckingham (5-1) hosts Randolph-Henry High School on Friday at 7 p.m.

Hampden-Sydney College’s (H-SC) football team is looking to kick-start a turnaround to its 2019 season this weekend in its homecoming... read more