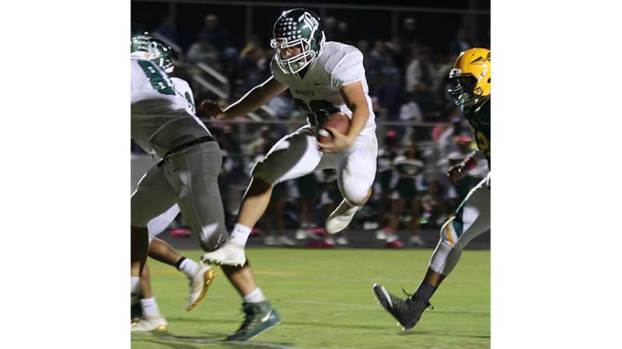 Knights roll to 57-30 win over Northumberland

Buckingham County High School’s varsity football team led 50-0 at halftime on Friday night and then emptied the bench for the entire second half on its way to a 57-30 road victory over previously undefeated host Northumberland High School.

“I thought we played good, executed the game plan,” Knights Head Coach Seth Wilkerson said. “And it was a long ride for us, so I thought we got off the bus, we were ready to play, and it just worked out.”

It was the Knights’ third straight lopsided victory, improving their record to 4-1 overall for the season. Buckingham’s starters did not play any of the second half.

Accounting for what helped his team take such a substantial halftime lead, Wilkerson said, “We were able to run the ball and get some yards.”

“Defensively, we put some pressure on the quarterback, and he didn’t have much time to throw it,” Wilkerson said. “(Defensive backs) played well, linebackers played well — we just played well overall, everybody.”

In the second half, “we were able to get some other guys in and give them some experience,” Wilkerson said. “(The Indians) scored some, but that’s OK. We made a couple mistakes within the second group but just got to keep working with those guys, and then they’ll get better, and it’ll help us overall as the year goes on.”