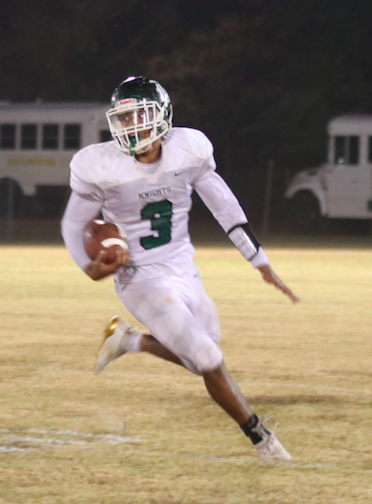 Buckingham County High School junior Xavian Gough was a difference-maker for the Knights on Friday night during their 45-6 victory over host Bluestone High School. (photo by Lyla Wood)

Buckingham County High School’s varsity football team produced a strong performance against host Bluestone High School on Friday night on its way to a 45-6 victory that improved the Knights to 3-1 overall on the season and 2-1 in the James River District.

“We did some things right,” Buckingham Head Coach Seth Wilkerson said. “We knew they were going to try to throw the ball on us some. Actually, they switched offenses. They had been running more of a Wing-T, and they came out with all spread stuff, so they kind of ditched what we’d seen on film, anyway. And we were able to make some adjustments and come away with a win.”

Buckingham had to play without Toney for much of last season as he was sidelined by injury, but he has been a consistent contributor to the team this year, and Wilkerson explained what he brings to the Knights.

“We get another dynamic player in the backfield, and he played well,” the coach said.

Senior running back Walter Edwards finished with 11 carries for 161 yards and a touchdown.

“Xavian Gough on defense, he played well,” Wilkerson said. “I think he led the team with eight tackles.”

Three of Gough’s eight tackles were for a loss. The junior has proven to be a versatile player for Buckingham.

“We move him wherever we need him at, week to week,” the coach said. “He plays linebacker for us some, and he plays (defensive back) some. With low numbers, we’ve kind of got to mix and match each week sometimes.”

Buckingham stays on the road this Friday night when it takes on a new opponent in host Northumberland High School, with kickoff set for 7 p.m.

In a Friday battle between the varsity football teams ranked in the top two for Division III of the Virginia Independent... read more